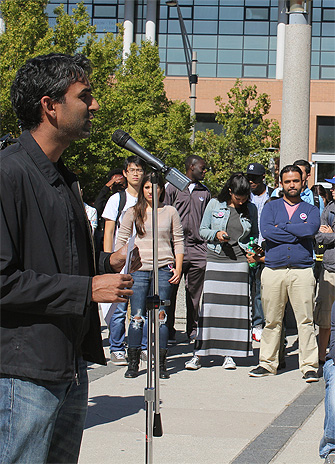 More than 500 York University faculty, staff, students and administrators gathered outside Vari Hall Thursday to express their frustration over the continuing imprisonment of Canadians John Greyson and Tarek Loubani in an Egyptian jail.

Greyson, an award-winning filmmaker and professor in York University’s Department of Film, and Loubani, an emergency room physician and professor of emergency medicine at Western University in London, Ont., were arrested and detained without charge on Aug. 16 while in Cairo, Egypt. They were travelling through the country on their way to Gaza to work on a film about Loubani’s humanitarian work training emergency room physicians in that region.

The rally, which was organized by the York University Faculty Association (YUFA), sought to keep the plight of Greyson and Loubani in the spotlight. It was accompanied by the distribution of more than 3,000 information leaflets, postcards and buttons to faculty, staff and students. Speaking at the event were: York President and Vice-Chancellor Mamdouh Shoukri; Faculty of Environmental Studies Professor Justin Podur, who is also a close friend of Greyson and Loubani; Faculty of Fine Arts film Professor Brenda Longfellow; and Andrew Bartlett, a graduate assistant working with Greyson. York history Professor Craig Heron, YUFA vice-president external, served as the event’s emcee.

“John and Tarek were among several hundred people who were arrested on Aug. 16. Hundreds were also killed that day,” said Podur.

“Under Egypt’s emergency law, the prosecutor can continue to extend their incarceration 15 days at a time for up to two years. I think it’s been far too long already,” he said. “They are being held in a tiny cell with six other men. It has one toilet and a sink with one tap. For the first 26 days of their imprisonment, they were held in a cell with 36 other people, similarly with one tap and toilet. They sleep on the concrete floor with the cockroaches.

“We were able to get a communication from them and they explained why they are on a hunger strike. It is because they don’t think Egyptian authorities are going to give them due process. We are making the transition from this being a detention to it being a prison sentence,” he said. “Investigative periods to lay charges are 24 hours, not 40 days.”

On Sept. 30, it is expected that Podur said Greyson and Loubani will go before a judge; however, the Egyptian prosecutor has repeatedly missed meetings, which has stalled the judicial process and frustrated family and friends.

“The only demand that makes any sense is that they be released immediately,” said Podur. He said that while Prime Minister Stephen Harper has repeatedly spoken about the situation, more needs to be done. “If you can hold someone for up to two years without charges, that’s not a legal process that ‘friends of Egypt’ should accept. If Canada wants to be a ‘friend of Egypt’, I think friends can tell friends that their laws are not very good.

“We have been asking for the prime minister of Canada to approach his counterpart in Egypt,” said Podur. “We think there should not be any normal business between Egypt and Canada until this matter is resolved.”

York President & Vice-Chancellor Mamdouh Shoukri was direct in his comments to the rally participants. “I am here on behalf of the University to express our deep concern and condemnation for the continuing detention of John and Tarek without charge.”

He outlined that the University has been in repeated contact with the Egyptian government through the Egyptian embassy to express concern and condemnation over the ongoing detention of the two men.

The next person to speak was Andrew Bartlett, a graduate student working with Greyson. He was one of five students who made a film calling for the release of Greyson and Loubani. The film, What has John Greyson taught me, offers a three-minute glimpse into the many important lessons in life and filmmaking that students say Greyson imparted to them. “He is truly an amazing person and I was lucky enough to be his grad assistant last year. He gave me more opportunities in the past year than I’ve had in all of my university studies, and that is two degrees,” said Bartlett. “I ask students at York Univesity to stand up and use social media to get the voice out to the world and continue to show our support to free John and Tarek. Use the hashtag #freejohnandtarek and get the word out.”

York film Professor Brenda Longfellow was the last to speak. She talked to those gathered about her deep fear and worry for the two men. “We in the film department are bereft and traumatized by this situation and it is evident that this feeling is shared by the larger York community, the Toronto arts community and the global arts community. It has been absolutely astounding to see this international campaign take off.

“When I stand here and feel the sun on my face. When I eat a meal or have a glass of wine to drink, I think of them. I think of them every time I wake up in the morning and when I go to bed at night. This is an intolerable situation that must come to an end,” she said.

She urged all present to write the prime minister, contact the Egyptian ambassador and use the power of social media to put pressure on the Egyptian authorities to free Greyson and Loubani. Longfellow said she was deeply moved by the students’ film and she repeated its closing line: “What has John Greyson taught me? That when someone is wrongfully imprisoned, you do everything in your power to get them out.”

To view a Tumblr site of images in support of Greyson and Loubani that has been created by York visual arts Professor Nina Levitt, click here.

To learn about ways to help with the effort to free the pair, visit the Free Tarek and John website. Click here to download letters that you can send to the prime minister of Canada and the Egyptian ambassador.