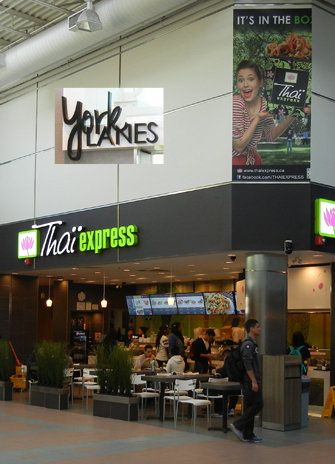 Perhaps a returning York student put it best, writing on Twitter “The newly renovated York Lanes is lookin’ sweet. You’re blessed if you have a meal plan this year.”

Over the past year there has been a great deal of change at York Lanes. Five new stores have opened their doors (or will soon) and four more long-time York Lanes businesses received substantial

renovations. At the same time, the common spaces, some unchanged since the day York Lanes opened in 1991, began to undergo similar upgrades.

Looking east into York Lanes. The new Falafel Hut is at left, and behind the bright yellow hoarding Shopsy’s Sports Grill is taking shape

The new restaurants are a mix of well-known brands and independent start-ups. In the latter category is Cucinetta Italian Café, a licensed fast Italian concept dedicated to serving fresh, high quality foods using locally sourced ingredients. Their menu features the Piadine, a hand-crafted Italian flatbread sandwich, a variety of salads, including caprese – ancient grain and Tuscan bean – and deserts such as Tiramisu and Cannoli.

Behind the long lines that rapidly greeted its opening, many will have also noticed Thai Express. As well, Qoola Frozen Yogurt Bar has leapt from the West Coast to open their first Ontario location at York Lanes, serving fresh frozen yogurt that is certified kosher, fat-free

and gluten free. Top off your frozen yogurt snack with a wide selection of fresh-cut fruit, toppings and syrups.

Still to open this fall are Shopsy’s Sports Grill a 90-seat restaurant including a large outdoor patio and Salon Concepts Spa. The Spa is on track to open up in early October, while construction on the Sports Grill is underway with a November grand opening planned.

Several old favourites are now in new spaces and in one case, new places. Falafel Hut, a York Lanes stalwart for 20 years, moved to a new unit with a patio this past summer. Both Popeye’s Louisiana Kitchen and Indian Flavour substantially renovated their restaurants and reopened at the beginning

of the fall term, while Anders & Flynt Opticians both expanded and overhauled their store over the summer months.

Future changes are still to come for York Lanes as the fall 2016 opening date for the York University subway station approaches. York Lanes is directly north of the new entrance to the subway station, and the entrances and corridors of the mall are scheduled for an upgrade before subway operations begin.

For more information on York Lanes businesses and news, keep an eye on the York Lanes website.