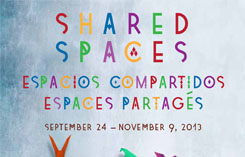 Lovers of fine culture will have plenty to celebrate over the next seven weeks with the 22nd annual Festival of Images and Words, which opens tonight (Sept. 24) and runs until Nov. 9.

Hosted by York University’s Glendon College in partnership with the non-profit organization Cultural Celebration of the Spanish Language/Celebracion Cultural del Idioma Español (CCIE), the Festival of Images and Words offers a veritable literary and artistic feast that spans across different languages and cultures.

This year’s event promises to deliver a rich and varied cultural experience.

“Curated under the theme ‘Shared Spaces: Artistic and Cultural Topography of the Americas’, the festival includes, for the first time, artistic and cultural manifestations from the English-speaking Caribbean, the French-speaking Caribbean, and of Brazil, as well as in pre-Columbian languages such as Nahuatl, Guna and Quechuan, in addition to those from Spanish-speaking Latin American countries, Canada and the United States,” says Glendon Professor Margarita Feliciano, the festival’s director.

All are welcome to attend, says Feliciano. Special guests include Don Valley East MPP Michael Coteau, who is Ontario’s minister of citizenship and immigration, and guests from the Spanish-speaking consular corps. “Shared Spaces” features artistic expressions from Latin America and the Caribbean by artists Carlos Torres, Charmaine Lurch, Mira Martínez, Oswaldo León Kantule, Shaniqueki S. Bartley. There will be a performance by Mexican singer Rosy Cervantes.

Nineteen events have been arranged over the seven-duration of the Festival of Images and Words. Events include curated film festivals and screenings, lectures, authors presenting readings of their works, a discussion of the importance of translation, staged readings and a one-act play, a concert and more. To get the full program of events, click here. As with previous festivals, all programs are available in English, Spanish and French.

To learn more about the festival, its organizing committee and history, visit the Festival of Images and Words website, on Facebook at www.facebook.com/festivalofimagesandwords or Twitter at @22PalabraImagen.