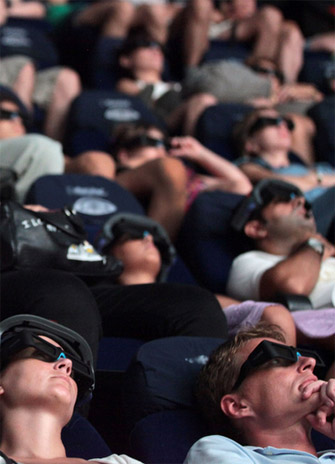 Blockbuster films like Avatar and The Hobbit have brought 3D stereoscopic technology and art to the mainstream. From major motion pictures to home television sets, desktop computer screens and handheld video gaming devices, 3D is everywhere.

Organized by the 3D Film Innovation Consortium (3D FLIC) and researchers from York University, the conference is designed to enhance synergies between art, business and research to develop best practices, enhance the 3D viewing experience and respond to the rapid growth in audience appetite for 3D entertainment. The conference features a blend of keynotes, panel discussions and presentations, with screenings and master classes rounding out the program.

The conference program offers numerous presentations from leading industry figures. Some of the presenters include: Irish artist and director Catherine Owens, known for her collaborative work as a director of visual content for the Irish band U2 and the film U23D, will talk about her experiences directing that film; Jim Chabin, president of the International 3D & Advanced Imaging Society and past president of The Academy of Television Arts and Sciences (Prime Time Emmys), will speak about the global state of stereoscopic 3D; Buzz Hays, who has worked with directors Baz Luhrmann, Martin Scorsese, Ang Lee, Ridley Scott, Barry Sonnenfeld and others, will talk about the fundamentals of stereoscopic 3D; Robert Neuman, the stereoscopic department head for Walt Disney Animation Studios and the stereoscopic supervisor for Disney’s 2012 Oscar nominated film, Wreck-It Ralph, will talk about his industry experiences; and Hugh Murray of IMAX fame, who was the stereographer for the 3D version of Harry Potter And The Deathly Hallows Part 2, will address the need for quality in stereoscopic 3D.

York faculty participating as presenters and moderators at the conference include: York computer science & engineering Professor Robert Allison, recipient of a Premier’s Research Excellence Award from the Province of Ontario for his research in human stereoscopic vision and depth perception; Lisa Philipps, associate vice-president research; film Professor Ali Kazimi, recipient of a Leaders Opportunity Fund from the Canada Foundation for Innovation to set up the Stereoscopic 3D Studio@York; Laurie Wilcox, professor of psychology and associate director of the Centre for Vision Research; and Karim Benzeroual, a postdoctoral in stereoscopic 3D vision.

There will be a special screening and talk about Born to be Wild (2011), a 3D film that documents orphaned orangutans and elephants and the people who rescue and raise them. The film will be screened on Sept. 22 at the IMAX Scotia Bank Theatre, 259 Richmond Street West, Toronto. Producer Drew Fellman will give a special presentation on the film and offer a preview of his newest IMAX work in progress, “Island of Lemurs: Madagascar”, which is due to be released in 2014.

Panels include: Stereoscopic Artistry; Diverse Approaches to Stereoscopic 3D; 3D Broadcasting; Beyond the Cinema Screen, the Perception of Motion in Stereoscopic 3D, and many more. There will also be a special online interview with French director Jean-Pierre Jeunet that will feature 12-minutes from his new 3D film The Young and Prodigious T.S. Spivet. Joining Jeunet on the panel is his stereographer Demetri Portelli and York film Professor Ali Kazimi. Portelli will also give the conference keynote master class.

Information and conference registration forms can be found on the conference website.