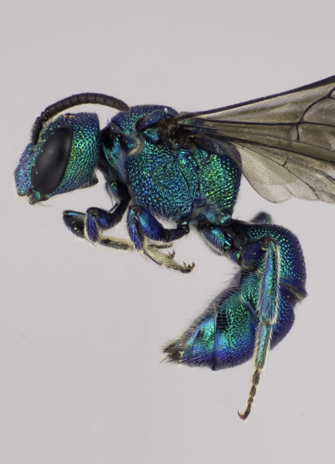 The article, “Revision of the rare Mesoamerican bee genus Mexalictus (Hymenoptera: Halictidae) with the description of 21 new species”, published in the journal Zootaxa, identifies the bees as belonging to the genus

Mexalictus, which are mostly found in cloud forests and other damp habitats at high altitudes from southern Arizona to Panama.

“Most of them are very rare – known from only a handful of specimens or less, sometimes only one,” says Dumesh. “Because their habitats are often imperilled from deforestation and climate change, finding them before they become extinct is a race against time.”

When the word “bee” is mentioned, most people think of honey bees and bumble bees, or honey, stings and complicated social lives. But, of the 20,000 bee species now known, less than 10 are honey bees, while there are more than 250 species of bumble bee. Most of the remaining 19,700-plus species live solitary lives in holes in the ground or in hollow twigs, and many of them cannot sting. “The 21

new species described are likely solitary bees that nest in the ground, but they are so rare that their nests have never been discovered, even after several field trips to find them,” says Dumesh.

Cataloguing the world’s bees is an enormous task that has involved hundreds of researchers since the beginning of taxonomy – the science that aims to document all living things on our planet. York University’s bee lab has now described more than 90 species of bees collectively, while more than 100 undescribed species are currently being worked on. However, within the York University bee museum there are tens of thousands of specimens from all over the world which remain unstudied and there is a good chance there will be many more undescribed species among them.

Bees are the most important pollinators on the planet; this is true for agricultural crops as well as wild plants,

says Professor Laurence Packer, Dumesh’s supervisor and York bee lab leader. Without bees, our diets would be more restricted; nuts, berries and coffee would all be in shorter supply and thus more expensive.

“Many bees are declining in numbers and honey bees and their beekeepers continue to suffer devastating losses,” says Packer, after whom one of the new species is named. “But there are almost 20,000 other species of bee and these often pollinate our crops while honey bees get the credit. Documenting what these wild bee species are and what they do, as well as understanding their role in agriculture and our planet’s

overall ecology is all extremely important.”

Dumesh’s work was undertaken for her MSc degree in York University’s Department of Biology and involved collaborations with collectors and museums throughout North and Central America.

To view a photo gallery of some of the bees studied within the York bee lab, including several of the bees described in Dumesh’s paper, click here.