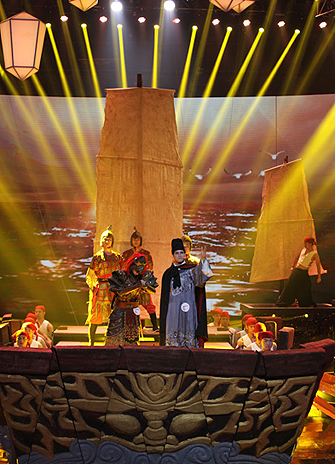 Glendon College student Luc Pokorn is a bit of a star. Perhaps not here in Canada as yet, but in China, it’s a different story.

in Changsha, China. He also won the Online Popularity Award as a result of earning the most votes from fans online.

Glendon student Luc Pokorn performs the role of Zheng He, a renowned fleet admiral, diplomat and explorer in Chinese history, as part of the “Chinese Bridge” Chinese Proficiency Competition in China

This is the first time a Canadian university student has won the title since the competition’s inception, says York Professor Xueqing Xu of the Department of Languages, Literatures & Linguistics in the Faculty of Liberal Arts & Professional Studies.

“I will never forget the wonderful time I spent in China,” says Pokorn. “I met so many people from around the world and made some really good friends.”

He is one of five continental champions representing five different regions – Oceania, Asia, the Americas, Europe and Africa. The contestant who won the world champion has lived in China for more than 13 years.

The almost month-long competition – July 6 to 30 – was an international event sponsored by the Office of the Chinese Language Council International (Hanban) in Beijing and was broadcast across the country by Hunan Television, China’s second largest television station. That’s where the star power comes in. Not to mention he garnered attention at a media conference once he was back in Canada, where York University did a video interview with him.

The competition, says Pokorn, was about more than just language skills, contestants had to perform – sing, dance, act – in elaborately staged events that drew audiences in. During the first round finals he had to play the role of Zheng He, a renowned fleet admiral, diplomat and explorer in Chinese history, in a short play c

o-starred by famous Chinese actor Zhang Tielin. The participants also had to understand Chinese culture and know about the country in general.

Fans of the competition voted for their favourite in the Online Popularity Award, which Luc Pokorn (centre) won

As part of the competition, Pokorn had to compete in several races, including one that was similar to the television show “The Amazing Race”. About 130 participants competed in the contest which was open to foreign-born post-secondary students under age 30 or overseas-born Chinese whose first language is not of Chinese origin. More than 800 students from some 60 countries have participated since its inception.  “It was a milestone in my life,” he says.

He also learned about himself. Upon reflection after hitting a few snags, Pokorn says he realized he needed to exercise more patience. His impatience cost him points. Had he been more patient at times, he feels he could have had a better shot at winning the world title. Champion of the Americas, however, is no small feat. It comes with a full scholarship to the Chinese university and program of his choice, all expenses paid, including air fare.

Pokorn remains passionate about languages. In addition to English and Mandarin, he also speaks French and Spanish. This September he will be on a year exchange at the Autonomous University of Madrid in Spain. He plans on doing his fourth year at Glendon and his master’s degree in China,

thanks to the scholarship.

Luc Pokorn plays the role of a monk/chef from Southern China in a contest aimed at testing the participant’s knowledge of Chinese cuisine with a riddle. In this case the riddle was “monk jumps over the wall” referring to a dish with many different meats.

It was his desire to learn Mandarin that landed him in China after he completed his first year at York, what he calls his gap year. It was only supposed to be for three months and that’s all his father agreed to fund, but Pokorn wasn’t happy with his proficiency in Mandarin and decided to stay another 12 months – he didn’t suppose his father would come to China to collect him. His gamble paid off. “It’s difficult to learn outside of the country,” he says. To support himself, he taught English, while trying to master Mandarin.

He remembers arriving in China knowing how to ask how much something costs, but not understanding the answer. He thinks he overpaid. But it was all part of the adventure, “a really rich experience,” he says. “I fell in love with the country through this process.”

It was this stubbornness that ultimately gave him the edge he needed. In May, he won first place in the 12th annual Chinese Bridge Language Preliminary Competition for the Ontario and

Manitoba regions, held at Seneca College (see May 14 issue of YFile). That win qualified him for the grand finals in China.

At home with the Champion of the Americas trophy

So about that master’s degree, Pokorn is debating whether to go into something to do with diplomacy, capitalizing on his international studies degree, or follow his childhood dream of becoming an actor and enroll in theatre school. He has after all a waiting audience in China.