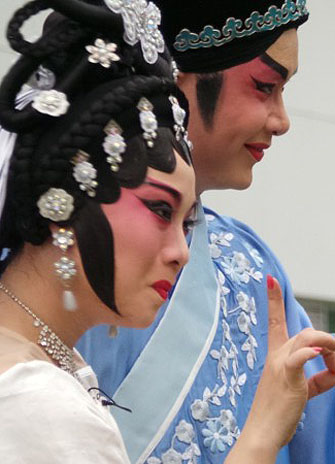 The Department of Theatre in York University’s Faculty of Fine Arts is hosting the Toronto premiere and only Ontario performance of the Nanning Cantonese Opera Troupe’s production of The Painted Skin, a haunting story of seduction written by Chua Soo Pong and composed by Zhuang Hui Xuan.

This new chamber opera, performed in the traditional style with a Chinese classical music score, elaborate costumes and captivating stylized dance, will be presented Sept. 10 and 11 in the Sandra Faire and Ivan Fecan Theatre at York University’s Keele campus.

Based on a 17th-century Qing Dynasty tale, The Painted Skin tells the story of a scholar ensnared by a beautiful temptress. Returning one evening from a literary gathering in a nearby town, Wang Sheng encounters a young lady. She introduces herself as Xiao Yu and claims that her parents are long dead and that she lives with her brother-in-law, who wants to sell her off to a rich old man as a concubine. Sympathetic to her plight, Wang offers Xiao Yu sanctuary for the night in his study. He succumbs to her wiles and embarks on a tempestuous affair, not realizing that she is in fact a ghost.

“This riveting production has drawn critical acclaim in Asia and Europe, and we’re delighted to bring it to York,” said York theatre Professor Don Rubin, who invited the Nanning Opera Troupe to bring the show to Canada. “It offers Torontonians a rare opportunity to experience one of the world’s richest theatrical forms.”

The Nanning Cantonese Opera Troupe is known for its interpretations of traditional classical Chinese opera – a form that dates back to the third century – and for its performances of new works in the classical style.

Chua, the librettist for The Painted Skin, has been a pivotal force in the contemporary resurgence of Chinese opera in Singapore, throughout Southeast Asia and beyond. A dancer, actor, writer and scholar, he is recognized internationally as a leading authority on the art form. Chua served as founding director of the celebrated Chinese Opera Institute in Singapore from 1995 to 2010. In addition to more than two dozen opera libretti, he has written two bilingual comic books on Chinese opera for children, and a series of books in Chinese on Hokkien, Cantonese and Teochew opera. Currently a professor at SIM University, Singpore, he has also taught theatre and dance at universities in Japan, China, Korea, Indonesia, Malaysia and Thailand. He was one of the regional editors for the Asia volume of the York University-based, UNESCO-supported, six-volume World Encyclopedia of Contemporary Theatre (Routledge, 1994-2000).

The performance of The Painted Skin at York University will be preceded by a lecture and demonstration of Chinese opera by William Lau. An alumnus of York’s Graduate Program in Dance (MFA ’91), Lau was the founder and long-time artistic director of  Toronto’s Little Pear Garden Collective, a pioneering force in the development and mainstreaming of Chinese performing arts in Canada.

Nanning Cantonese Opera Troupe performs The Painted Skin Sept. 10 and 11, at 7:30pm in the Sandra Faire & Ivan Fecan Theatre in the Accolade East Building on York University’s Keele campus. Admission is $20 for the general public; $12 for students. To purchase tickets, visit the York University Box Office website or call 416-736-5888.