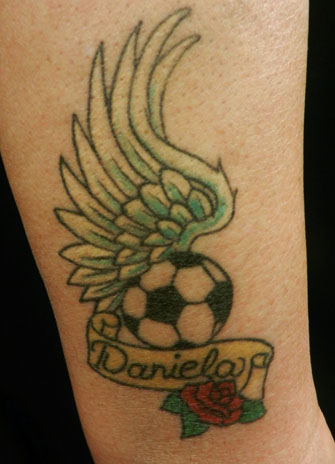 Death leaves an indelible mark on the hearts of those left behind, and an increasing number of individuals are choosing to make that loss visible by commissioning tattoos honouring their deceased loved ones.

Now, York University sociology Professor Deborah Davidson (right), along with a cross-disciplinary team of researchers, plans to capture these images – and the stories behind each act of remembrance – as part of a new project funded by the Social Sciences & Humanities Research Council of Canada (SSHRC) to build the framework for the world’s first comprehensive public archive of memorial tattoos.

“Memorial tattoos both embody memory and serve as a kind of translator of memory into a language readable by others – a way to hold and share memories,” says Davidson. “To date, I have not found a digital or physical archive of memorial tattoos and their contextualizing narratives, so such an archive will be significant because it will serve as a cultural heritage site, acknowledging important memories and sharing them publicly, and provide scholars with a digital database of memorial tattoos and narratives for analysis.”

Davidson says the archive will not just be an academic tool, but will also serve as a place to foster new relationships between academics and individuals with memorial tattoos, along with tattoo artists and community groups. In addition, it will offer users the option to become a part of the project by uploading their own images and stories.

Having already collected dozens of stories and photos for earlier research, Davidson is now in the process of crowd-sourcing more potential contributors. Moving from memorializing the deceased to a broader definition of memorialization, Davidson and her team are looking for potential participation from persons with “tattoos in remembrance or honour of a person, place, animal, relationship, event or transition within the life course.”

With a goal of 500 images and stories to start, Davidson says this archive is just the first phase of a larger international, interdisciplinary collaboration, comprised of social science, humanities, electronic library science and computer science scholars at York University and the University of Toronto, the University of Bath and Plymouth University in the U.K., and Monash University in Australia.

“Our project is directed at both the co-production and mobilization of knowledge. The archive will provide a rich source of data for researchers engaged in a broad span of work, including in memorialization, memory and visual narrative and computer-assisted data collection methods. The importance and contributions of this project lie precisely within the intersections between the public and the private, providing a valuable resource for the collection and sharing of memorial tattoos and the stories that are embedded within.”

To find out more about contributing to Davidson’s project, e-mail yorktattooarchive@gmail.com