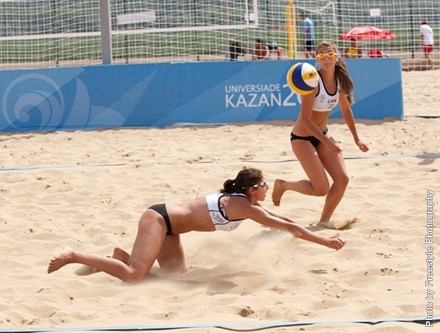 York University Lions women’s volleyball player Melissa Humana-Paredes and her partner, Taylor Pischke of the University of Manitoba, finished in fourth place at the 27th Summer Universiade in Kazan, Russia.

Humana-Paredes and Pischke placed fourth after a 2-0 (21-11, 21-14) loss to Chantal Laboureur and Julia Sude of Germany in the bronze-medal match. Earlier that same day, the tandem was defeated in the semifinals by Russia’s Ekaterina Khomiakova and Evgeniya Ukolova in two close sets (21-18, 21-19).  Their competition in the semis was tough as the Russian pair placed ninth at the 2012 Summer Olympics in London.

Humana-Paredes and Pischke, who claimed the bronze medal at the International Federation of VolleyballFIVB under-23 world championships in Poland in June, flew through preliminary competition in Russia, winning their pool after defeating China 2-0 and Brazil 2-1. Receiving a bye into the second round of the playoff format, they then defeated Germany 2 in straight sets before losing to Poland in straight sets.

With the loss, the Canadian duo had to win three straight matches to advance to the semifinal, which they did against Austria, China and Thailand (quarter-finals), all in two games. All three matches in the single elimination were Thursday.

Humana-Paredes has spent the past three seasons with the Lions and has cemented herself as one of the top outside hitters in the OUA. She is a two-time first-team all-star and also earned CIS second-team all-Canadian honours in 2012, en route to being named York’s female athlete of the year.

Humana-Paredes and Pischke, who posted an overall mark of 6-3 in Kazan, now head to a FIVB Grand Slam event in Long Beach, Calif., and a NORCECA tour stop in Cuba in August before returning home to prepare for the upcoming indoor CIS season.

In the men’s tournament, Grant O’Gorman and Samuel Pedlow ended up in seventh position with an overall mark of 4-5 after a loss to the United States. O’Gorman was a rookie libero for the Lions men’s volleyball team this past season.