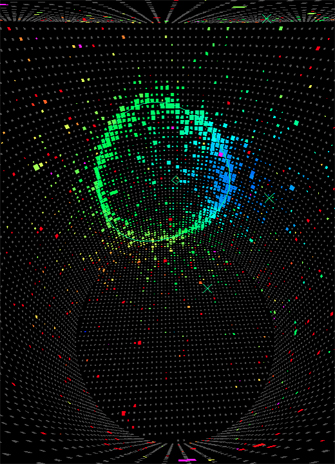 TRIUMF, a Canadian laboratory for nuclear and particle physics that works in partnership with York University and University of Toronto, announced on July 19, a new breakthrough in understanding neutrinos – nature’s most elusive particles.

The international Tokai to Kamioka (T2K) collaboration designed an experiment to investigate how neutrinos change from one form to another as they travel. TRIUMF researcher Michael Wilking spoke at the prestigious E

uropean Physical Society meeting in Stockholm, Sweden, confirming definitive proof of a new type of neutrino oscillation in which muon neutrinos transform to electron neutrinos. It has been known that neutrinos transform from one kind into another, but this particular transformation had never before been conclusively observed and is a major milestone.

An image of the electron-neutrino candidate in Super Kamiokande underground detector in Kamioka, Japan, image courtesy of the Tokai to Kamioka (T2K) collaboration

In the T2K experiment, a beam of muon neutrinos is produced in the J-PARC accelerator facility in Tokai, Japan. The neutrino beam is monitored by a nearby detector complex ND280 (much of which was built in Canada) and aimed at the gigantic Super-Kamiokande (SK) underground detector in Kamioka, 295 km away. An analysis of data observed at SK associated with the neutrinos from J-PARC reveals that there are more electron neutrinos (28 events) than would be expected (4.6 events) without this new transformation process. This T2K observation is the first of its kind to explicitly see a unique flavor of neutrinos appear at the detection point from a beam initially consisting of a different type of neutrino.

York University made significant contributions to this historic result, focusing on the study of the rate of neutrino production at the J-PARC facility and the rate of neutrino interactions in the T2K nearby detector complex. In order to measure the oscillation effect precisely, these are important components to this measurement since it is necessary to know how many neutrinos are present before oscillations, and how often they interact, in order to determine how many have transformed.

The neutrinos in T2K are produced from a beam of protons. The Optical Transition Radiation (OTR) device monitors the proton beam accurately and is critical for these precision neutrino measurements. York University Physics Professor Sampa Bhadra is the project leader for the OTR, which was built in collaboration with the University of Toronto and TRIUMF. The OTR monitor is essential for the stable and safe operation of the experiment, and the beam properties that it measures are important inputs for estimating the production rate of neutrinos. York PhD graduate Vyacheslav Galymov played a central role in this analysis and with graduate student Elder Pinzon developed analysis techniques to interpret the data from this monitor. Mark Hartz, a postdoctoral fellow in the Department of Physics & Astronomy in York’s Faculty of Science and a research associate at the University of Toronto, coordinated the neutrino flux estimation needed for the physics measurement. He developed methods to further constrain the models of neutrino production and interactions by using measurements of neutrino interactions in the T2K near detectors. This led to the reduction of uncertainties on the predicted rate of neutrino interactions at SK by more than a factor of two, which along with better statistics, were critical for this significant result.

Bhadra (left) and Hartz, a postdoctoral fellow in the Department of Physics & Astronomy, examine the data from the Optical Transition Radiation device

OTR’s mechanical systems were designed by mechanical engineer Mircea Cadabeschi and built mostly at U of T, where graduate student Patrick de Perio worked on understanding the microscopic details of how neutrinos interact with atoms, producing the particles that we eventually observe in the detectors. He also helped develop a new software algorithm with other Canadian researchers for characterizing these particles in the SK detector in Japan. Both these efforts were critical in reducing background from the physics signal and increasing the precision of the measurement used for the new result.

“This form of transformation is sensitive to matter-antimatter asymmetry in the universe,” says Bhadra. “What can be more exciting that studying a particle that may hold the clue to our very existence?”