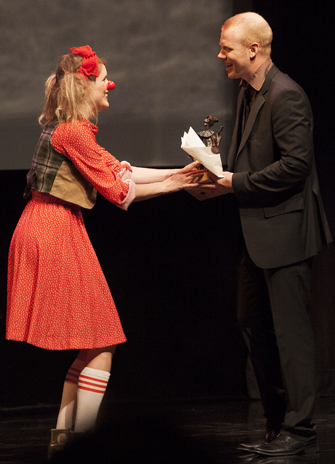 The red carpet, towering talent, fabulous frocks and a rocking party atmosphere are all hallmarks of the Dora Mavor Moore Awards, presented annually by the Toronto Alliance for the Performing Arts to celebrate the city’s best theatre, dance and opera productions. This year’s edition, held June 24, featured a VIP pre-party at the Sony Centre for the Performing Arts followed by a full house at the awards show at the Bluma Appel Theatre in the St. Lawrence Centre for the Arts, overflowing onto Front Street for the after-party. As always, York talent was in the midst of the action.

award categories. Five were singled out by the juries as number one among the best of the year, striding across the stage to accept their bronze statuette to the cheers of their peers.

Santee Smith (MA ’04) picked up the prize for outstanding choreography for her work Susuriwka – willow bridge. Starting from a place of exploration of indigenous cultures, from Smith’s own Iroquois roots and Japan’s Ainu people, whom she met as part of a cultural exchange to Yokohama in 2010, the work pays homage to land, spirit and shared cultural beliefs.

In her acceptance speech, Smith gave thanks for all the gifts that we have and our ability to celebrate our gifts together through performance. After the show she also gave thanks to York University and her continuing connection to its students and faculty as a guest teacher.

“I worked on my first major production while doing my master’s degree,” Smith said. “My commitment to dance creation and the formation of my company have grown out of that. York gave me an amazing foundation for my work now.”

Playwright Adam Seybold (MFA ’05) received the Dora for outstanding new play for The De Chardin Project, a two hander in which he also co-starred. In this Theatre Passe Muraille production, Seybold and his collaborators, including

director Ginette Mohr (MFA ’05), told the true story of paleontologist and Jesuit priest Pierre Teilhard de Chardin (1881-1955), who strove to connect his scientific discoveries about the origins of man to his faith but was condemned for his efforts.

“This year marks my 10h in Canada and I spent my first years here at York,” said Seybold. “The people I met at York were so amazing, and the relationships I forged there have made everything I’ve done since possible.”

“Obaaberima was a very special show for me and I’m really pleased to win a Dora for it,” she said. “The collaborations on the piece were so important; it was an amazing team effort to make it come alive. Everyone on the show was an inspiration – not just for that production, but for working in theatre in general.”

Ramsay said she appreciates the network and relationships she developed during her studies at York, and also the positive role models she found in the theatre department.

“In addition to skills and theoretical knowledge, I think I learned a lot of my work ethic from the example of professors and staff,” she said.

Dana Osborne (BFA’96) added another Dora to her trophy case with the prize for outstanding costume design for Soulpepper’s Rosencrantz and Guildenstern are Dead.

Set designer and scenic artist Andrea Mittler (BFA ’02) won for her work on Wordsymth Theatre’s The Dumb Waiter. She didn’t just take on designing the set – she also built and painted it.

“York prepared me to be hands-on in a lot of different ways,” she said. “I think one of the strengths of the program is that the faculty members are working professionals. And I occasionally get to work with them now – including on this show.”

“I think it was a really great example of a group of remarkable artists doing what they do best in a small space,” said Mittler. “The intimate theatre and the energy of the actors and audience made for a magical show.”

Given the high level of competition for the Dora Awards, even a receiving a nomination is brag-worthy. Other York nominees included:

Former York theatre student Franco Boni, the general and artistic director of The Theatre Centre, received the 2013 George Luscombe Award for Mentorship for his dedication to nurturing new talent and boundary-pushing works.