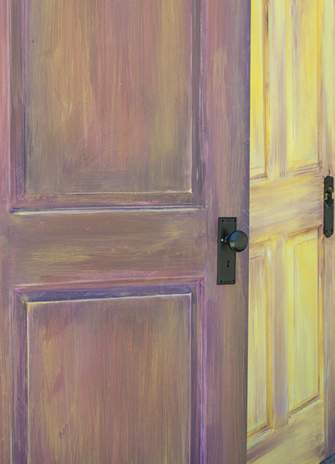 Stage’s 2013 Shakespeare in High Park productions, Macbeth and The Taming of the Shrew.

Professional and emerging artists in York University’s Department of Theatre are involved in almost every aspect of the shows, from direction and performance to behind-the-scenes production work in set design, set and costume construction, and stage management. Graduate students are in leadership roles and undergraduate students are getting hands-on experience as apprentices and assistants under the guidance of York faculty members and professional theatre artists on each production’s creative team.

Ker Wells and Ted Witzel are the first graduates of York University’s MFA Program in Theatre – Stage Direction in Collaboration with Canadian Stage, a landmark initiative supporting the development of outstanding directorial talent for the national and international stage. Their final thesis projects put them at the helm of Macbeth (Wells) and The Taming of the Shrew (Witzel), running in repertory under the stars throughout July and August at Canadian Stage’s Shakespeare in High Park.

Macbeth and Shrew share a cast, which includes Tiana Asperjan (left), who has just graduated from York with a BFA in Theatre. In Shrew she plays Lucentia, a character she describes as “a very rich young lesbian sent away to study by her father.” In Macbeth, she performs a number of smaller roles: Donalbain, Young Seyward, a murderer and one of the witches. She’ll be sharing the stage with pros such as Hume Baugh and Philippa Domville.

Asperjan feels her studies prepared her well for her Canadian Stage debut. “I’ve confidently tackled performance challenges like speaking in French and the witch’s unusual physical movements thanks to techniques I learned at York,” she said. “Working with, observing and listening to the experienced and talented actors in the cast, I try to be a sponge – but also to stand tall and put my work on the table, just as they are doing.

“I’m so excited and honoured to be performing on the High Park Amphitheatre stage. My York classmates are all coming with picnic baskets. And a couple of vanloads of family members are driving down from Thunder Bay to see the shows!”

In addition to sharing the cast, the two productions also feature some common elements in the set, designed by freshly-minted York alumna Lindsay C. Walker, one of the two inaugural graduates of the Department of Theatre’s MFA Program in Design for Performing Arts. While her design credits include Ontario’s Stratford and Shaw Festivals, this is Walker’s first professional collaboration with Canadian Stage and her biggest Toronto production to date.

Surrounded by her millinery creations, fourth-year student Michelle Tracey works in Department of Theatre’s wardrobe workshop on The Widow’s bodice for the Canadian Stage production of The Taming of the Shrew

“My designs for Ker mine the dark and elemental aspects of Macbeth, while with Ted we’re playing up the colourful comedy in Shrew,” she said. “Macbeth is straight-up medieval, while Shrew features modern-looking characters on a set that looks old-world.”

Walker’s set designs were brought to life in the carpentry workshop in York’s theatre department. Assisted by theatre production students Julian Bulof, Kyle Morton and Steph Raposo, Professor James McKernan oversaw the construction, incorporating a focus on sustainability as he does for every show in which he’s involved.

“We were able to reuse a number of scenic elements from other shows,” said McKernan. “When we had to build from scratch, we used reclaimed wood from the resurfacing of the stages in Canadian Stage’s other theatres, or Forest Stewardship Council certified lumber whenever possible.”

Doors for the stage set of Macbeth, constructed and painted in the Department of Theatre’s carpentry shop at York with the assistance of student interns

While the same basic set is used for both productions, some key elements are changed for each and the set offers a number of transformational surprises. “Without giving anything away, the set fits naturalistically into High Park, but it also stands out in stark contrast when that is called for,” McKernan said.

The costumes take the distinctions between the two shows to another level. York instructor Sylvia Defend, who serves as head of wardrobe for Shakespeare in High Park, describes Victoria Wallace’s designs for Macbeth as “sombre and earthy” and Astrid Janson’s designs for Shrew as “very contemporary and larger than life.”

Third and fourth-year students Dylan Bobier, Julia Campisi, Andrew Cleveland, Celine Moniz, AlexaPolenz, Sandra Mandich and Michelle Tracey have been working with Defend since May in the theatre department’s professionally appointed costume shop to build the 50 or so costumes for the shows. They are altering and adding dramatic flair to vintage and second-hand clothing as well as building a few special items from scratch.

Rounding out the York student talent contributing to Shakespeare in High Park are apprentice stage managers Christina Abes and Natasha Rodmell. They have been supporting the performance team from day one of rehearsal, observing the professionals, keeping track of all the props and in general helping to keep the productions running smoothly.

“It’s such an amazing opportunity to be immersed in the world of professional theatre,” said Abes. “As a student, you can’t devote your total time and energy to a production – you also have to go to class in the morning! Here at Canadian Stage I can focus completely on the show, full-time. It’s a wonderful experience.”

Like Asperjan, Abes credits her theatre training for giving her a firm foundation for the work. “I’m probably more shy than most in my field, but the production program at York threw me into many teamwork situations. After four

years I feel much more confident. The greatest lesson I learned at York was not how to build a set or create great production notes; I learned how to be adaptable.”

From left, Christina Abes and Natasha Rodmell work behind the scenes as apprentice stage managers for Shakespeare in High Park

Professor Elizabeth Asselstine, chair of the Department of Theatre, echoes the students’ enthusiasm for the Shakespeare in High Park experience.

“We look forward to many more such collaborations with Canadian Stage as we develop a strong internship base with the company for our students,” she said. “I’m immensely excited that a popular downtown production like Shakespeare in High Park is showcasing our talented students and the skills they have acquired in our programs.”

Macbeth opens July 3 and runs Wednesday, Friday and Sunday at 8pm until September 1. The Taming of the Shrew opens July 16 and runs Tuesday, Thursday and Saturday at 8pm to August 31. Admission is pay-what-you-can (with a suggested contribution of $20). More information about Shakespeare in High Park and directions to the amphitheatre are available on the Canadian Stage.