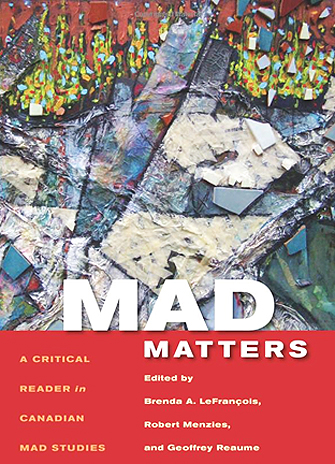 A new book, Mad Matters: A Critical Reader in Canadian Mad Studies, co-edited by York Professor Geoffrey Reaume, challenges dominant understandings of “mental illness” and conveys the lived experiences of the psychiatrized through a

It embodies “an important new movement”. What Toronto activist Mel Starkman in 1981 called, “The ‘mad’, the oppressed, the ex-inmates of society’s asylums are coming together and speaking for themselves.” Mad Matters brings together the writings of this vital movement, which has grown explosively in the years since. Among the contributors and co-editors to this 23-chapter volume are nine authors who have had, or do have, connections to York University as faculty, alumni and students.

Mad Matters (Canadian Scholars’ Press) will launch Tuesday, July 9, from 7 to 9pm in the main floor large meeting room at 246 Sackville St. (just east of Dundas and Parliament) in Toronto. It is wheelchair accessible. Refreshments and light snacks will be provided by The Raging Spoon. Some of the contributors and one of the co-editors will speak, followed by a Mad Comedy Jam featuring the best mad stand-up comedy.

“Contributors to Mad Matters provide a much-needed critical analysis of the prevailing medical model orthodoxy in the field of mental health by critiquing such areas as anti-stigma campaigns and the recovery approach, both of which appear to be progressive but neither of which address systemic discrimination and inequities faced by large numbers of people who receive psychiatric treatment,” says Reaume, a professor in York University’s Critical Disability Studies Graduate Program in the Faculty of Health. “The book promotes the importance of Mad Studies as a field of critical inquiry and activism that addresses pressing social justice issues relating to anti-discrimination and engagement by and for mad people in our communities.”

In addition to Reaume, the book is co-edited by social work Professor Brenda A. LeFrançois of Memorial University of Newfoundland and sociology Professor Robert Menzies of Simon Fraser University.

It contains contributions from scholars in numerous disciplines, as well as activists and psychiatric survivors. The connections between mad activism and other liberation struggles are stressed throughout, making the book a major contribution to the literature on human rights and anti-oppression.

Books will be available to buy at a 20 per cent discount during the book launch.