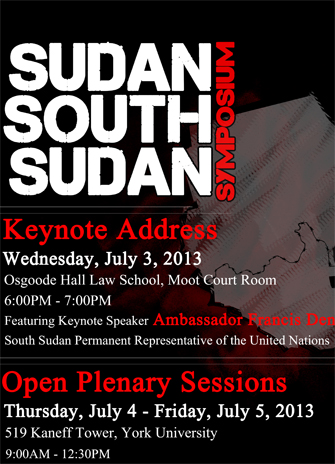 A three-day symposium at York will look at the current bleak situation in Sudan and South Sudan and what can be done to bring about stability and end the ongoing armed conflicts, human right violations and rising rates of refugees.

Prior to gaining independence in 2011, South Sudan was part of Sudan, which has been in a state of conflict for most of the last six decades with civil wars from 1955 to 1972 and again from 1983 to 2005. It is estimated that some 2.5 million people have been killed with another five million displaced. The Lord’s Resistance Army, comprised largely of child

soldiers, continues to terrorize much of South Sudan today.

“We’ve got quite a distinguished group of speakers, including noted experts from different disciplines, as well as practitioners and policymakers from the state, regional and international level,” says James Simeon, director of York’s Centre for Refugee Studies, which is organizing the event. “They will be looking at a wide range of environmental, social, economic and political factors affecting the two countries, not only to understand the underlying causes and context of the current

humanitarian crises, but to map out positive and constructive courses of action.”

Francis Deng, a lawyer, ambassador, South Sudan permanent representative to the United Nations, former special adviser on the prevention of genocide at the UN and author of more than 40 books, will deliver the symposium’s opening keynote address (on the current state of affairs in South Sudan) Wednesday, July 3 at 6pm in the Moot Court Room, Osgoode Hall Law School’s Kaneff Building, Keele campus.

For the next two days – Thursday, July 4 and Friday, July 5 – the morning plenary sessions will be open to the public at 519 Kaneff Tower, Keele campus, while the afternoons will be closed technical workings groups, where experts will discuss concrete solutions and policy options.

The first plenary session Thursday at 9am, will look at “Understanding the Extent and Nature of the Humanitarian Crisis in Sudan and South Sudan”. The panel will outline in detail the extent and nature of today’s humanitarian crisis on the macro level. The panellists will include: Isaac Lenaola of the High Court Justice in Kenya;

Schulich School of Business adjunct Professor Kevin McKague, a postdoctoral research fellow at the Ross School of Business at the University of Michigan; and documentary filmmaker Datejie Cheko Green (BA ’92, MES ’13); with Deng facilitating the discussion.

The topic of the second plenary session on the Thursday at 11:15am, will address “Understanding the Environmental, Economic, Social, Political and Cultural Factors Underlying the Chronic Humanitarian Crisis in Sudan/South Sudan: The Legacies of Unending Armed Conflict and War”. The panel will address what the situation is like on the ground regarding forced migrants, how the protracted armed conflict in Sudan and now South Sudan has impacted its citizens, and how non-governmental and other humanitarian agencies and the international community are responding to the crisis.

The panellists will include: Taisier Ali, executive director of the Peacebuilding Center for the Horn of Africa, Asmara, Eritrea; Amani El-Jack, assistant professor of women’s studies at the College of Liberal Arts and a lecturer of Women’s Leadership in a Global Perspective at the McCormack Graduate School; and Kennedy Jawoko of Ryerson University and Food Security Reporters Network in South Sudan and Uganda. The panel will be facilitated by Craig Scott, member of Parliament.

On Friday at 9am, Ali B. Ali-Dinar, associate director of the African Studies Centre at the University of Pennsylvannia and former president of the Sudan Studies Association, as well as the symposium chairperson, will deliver the open remarks, followed by two sessions open to the public. The first at 9:30am, “Constructive Paths Forward: Searching for Solutions to the Humanitarian Crisis through Peace-Making and Peace-Building”, will look at how the chronic humanitarian crisis in Sudan and South Sudan is rooted in ever escalating and protracted armed violence. It will discuss what concentrated efforts are needed to stabilize the countries and examine innovative approaches to peace-making and peace-building, and how large areas can be secured as protected zones.

Starting at 11:15am Friday, the plenary panel, “Investing in Sustainable Development and Livelihoods”, will explore and determine ways to build capacity within institutions connected to the environmental, economic, social, political and cultural factors, as well as those challenges highlighted in the previous day’s panels.