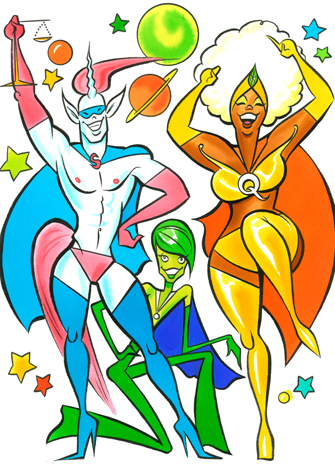 The Art Gallery of York University (AGYU), Centre for Human Rights (CHR), York Federation of Students (YFS), TBLGAY, and SexGen York committee will be hosting a series of events encouraging participants to embrace their inner superhero as they get involved with Toronto’s Pride Week from June 24 to 30.

Meanwhile, from 12 to 5pm on York’s Keele campus, students are invited to collaborate and decorate the York parade float banners, personalize their own superhero capes, and make signs in the Vari Hall Rotunda.

York will also be represented at Pride Toronto in the Community Fair on Church Street on Saturday, June 29, and Sunday, June 30, from 11am to 5pm. To help get in the super spirit, AGYU commissioned artist Maurice Vellekoop to create York’s very own Super Queer Super Heroes! POW! These super friends are the out-of-this-world mascots of York @ Pride.