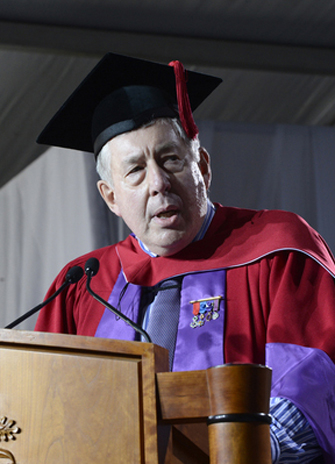 Instrumental in advancing the study of Canada at the university level in France, Lacroix has contributed significantly to the field’s international scope. A founder of the Association française d’Études canadiennes, he was co-editor of the journal Études canadiennes and vice-president of the Association nationale France-Canada. He became France’s representative on the Council international d’Études canadiennes in 1983 and was the council’s president from 1989 to 1991. His contributions to research and scholarship include editing 20 volumes in Canadian Studies that span a broad range of subjects, including politics to culture to language.

York University recognized Lacroix’s pioneering work as a scholar of Canada and originator of the discipline of Canadian Studies in France with an honorary doctor of laws degree during Spring Convocation ceremonies for graduates of Glendon College on Saturday, June 15. Lacroix spoke to the Glendon graduands about his fascination for Canada and appreciation for Canadian literature, government and its role in preserving French and English as the country’s official languages and its early adoption of multiculturalism and diversity.

Currently Professeur de civilisation nord-américaine at the Université Sorbonne Nouvelle Paris 3, Lacroix served as president of the institution in 2001-2002. Prior to this, he served as Recteur-Chancelier de l’Académie in Besançon, a prestigious position that made him the representative of the Minister of Education in charge of education, including at the university level, in that designated region of France. He took up similar posts in Aix-Marseilles in 2002 and in Orléans-Tours in 2004.

“When I decided to launch Canadian Studies in France – a totally new transdisciplinary field of research – the need was felt to invent a new word to characterize these objective scientific observers of Canada,” said Lacroix. “Even Canadians were surprised that we could be interested in studying Canada, so we coined the word ‘Canadianists’, which during an interview I gave at Radio Canada, was misinterpreted to be Canadalogue, as if I was a volcanologue.” Something he termed as obviously incorrect because Canada is too quiet a nation with too great a sense of consensus to be compared to a volcano.

“I first arrived in Canada in the late 1960s – in 1969, the date of the Official languages Act, an initiative of the federal government that recognized the dual character of Canada,” said Lacroix. “Thanks to language, the identity of two of the founding peoples of Canada was officially recognized.”  It was then LaCroix decided to launch a translation program at Laval University in Quebec.

His first contacts with Glendon were established then and the college was widely recognized for its early role to offer French Studies, multidisciplinary studies and translation. Glendon was an early leader due to its focus on French language education and its commitment to offering a bilingual education during a time when French was essentially confined to Quebec, a commitment Lacroix says was truly innovative.

“I was in this country in 1970 during the October events, as well as in 1971, which is linked with the official promotion of multiculturalism, another distinctive trait of Canadian identity,” he said. “The recognition of the added value of cultural diversity and its internationalization is part and parcel of the Glendon project and mission statements.

Over the ensuing years, Lacroix visited and worked with Glendon, a charming campus that he described as a small Harvard. “The progression of my career has always in direct parallel with the history of Glendon. I share the values of this institution and easily identify myself to York University.  It is a great privilege to become a small cousin in the family, which in a little more than 50 years has been profoundly transformed to become one of the very best universities in Canada

“I started my involvement in Canadian Studies when I was your age and my attachment to Canada has led me to this great day. The future is promising for all of you, you may be proud of Glendon. You may be proud of your achievements,” said Lacroix.