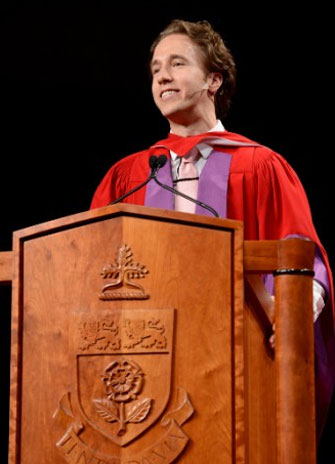 Everything in the world disappears – buildings crumble, pyramids get covered with sands of time, markets go up and down in financial worlds. In fact, perhaps the only true legacy in this world is “how you shape how one young person looks at this world”, said Craig Kielburger Friday during Spring Convocation. “The only thing truly lasting is to teach a child.”

Kielburger received an honorary doctor of laws degree from York during the Faculty of Education convocation ceremony for his work with the non-profit organization Free the Children, which he co-founded at the age of 12.

“I believe you have sought extraordinary noble work,” he told graduands. “In our work, we seek to build schools, providing education to children around the world, and I believe there is no greater gift than the gift you will be providing to countless young people in this province, in this country, and perhaps at an international level.”

Few children have the privilege to gain an education. About 113 million children between the ages of five and 11 have never once stepped foot into a classroom, have never once received that opportunity, said Kielburger, who is the youngest ever graduate of the Schulich Kellogg Executive MBA Program from York’s Schulich School of Business. “The vast majority of who are girls.”

Free the Children works in “war zones where former child soldiers in Sierra Leone sit next to children who are orphaned”. In Haiti after the earthquake, schools collapsed, but children continued to study under trees. In places like East Africa, kids will walk four, five, six hours each way for the opportunity, the privilege they realize, to receive an education.

Kielburger told the graduating class that after reading a Toronto Star article about a boy, at the time, his own age who was murdered for trying to make a difference in Pakistan, he asked his teacher if he could give a talk to the class about it.

“In that one moment that teacher made a decision that forever changed the course of my life[…] He could have easily have looked at me and said, ‘not today, we’re late. We’re running behind schedule, we have to prep for those standardized tests’. But instead, he realized that yes, education is about reading, writing, arithmetic, it’s about the three Rs, but it’s also about compassion, courage and community; It’s also about the three Cs. He said we have to educate the mind, but we also have to educate the heart.”

And in that moment, one teacher changed the direction of the life of one student who went on co-found the world’s largest network of children helping children through education. It is now the leading youth-driven charity with 1.7 million young people involved in all of its programs. It works in eight developing countries providing education, health care, food security, clean water and alternative income programs. It has built more than 650 schools and school rooms.

He also co-founded Leaders Today, an organization that annually provided 350,000 young people with important leadership skills through a unique local and international training program. He is also the author of the book, Free the Children, which won the Christopher Book Award and was translated into eight languages. With his brother Marc he also wrote Take Action! – A Guide to Active Citizenship, Take More Action, and From Me to We, books that encourage people to create a better world through volunteerism and social involvement.

Kielburger has won many prestigious awards, including the Nelson Mandela Human Rights Award and the World Economic Forum GLT Award, but he never forgot that one teacher that changed his life. He told graduands, “You’ve picked a difficult profession, you’ve picked a challenging profession, and you’ve picked an extraordinary profession.”