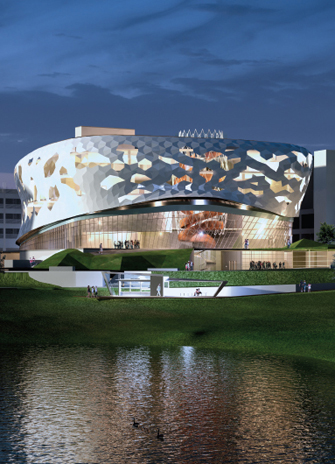 “This is a great day for York,” said President and Vice-Chancellor Mamdouh Shoukri. “The creation of a new Engineering Building is an important milestone on our path to achieving York’s longstanding vision of broadening the academic programs available to our students, supporting innovation and economic development.”

The 169,000-square-foot, five-storey building, which will open in 2015, will accommodate academic space for three engineering disciplines – electrical, civil, and mechanical engineering. Design workshops, project areas, classrooms and laboratories will be included in the five floors of space. Special emphasis has been placed on social and public areas that will encourage undergraduate, graduate and post-graduate students to mix with faculty members and researchers.

“A house is not a home unless it contains food and fire for the mind,” said Lassonde School of Engineering Dean Janusz Kozinski. “We’re creating a home for what we call Renaissance Engineers, not a pristine academic palace with gleaming lecture theatres – we don’t have any in fact!  Students will be writing on walls, building robots, brainstorming business plans and huddling in project groups. This building won’t create great ideas but it will give our students a home to do just that.”

“Investing in state-of-the-art, sustainable buildings like the new home of the Lassonde School of Engineering at York University is vital to our province’s future economic growth. Developing a skilled and knowledgeable workforce is an important part of the Ontario government’s plan to remain globally competitive,” said Brad Duguid, minister of training, colleges & universities.

York University is investing $35 million in the project, including a recent $5 million gift from Ignat Kaneff, chairman and CEO of the Kaneff Group of Companies.

An artist’s rendering of the new Engineering Building, shown at night with a central double helix staircase illuminated. The 169,000-square-foot, five-storey building, which will open in 2015, is conceived as a cloud. Image courtesy of ZAS Architects + Interiors.

“Ontario has gained a world-class engineering school at York University in York West. The Lassonde School of Engineering is a prime example of how collaboration and an interdisciplinary approach to higher education equips students with the tools necessary to excel on the world stage,” said the Mario Sergio, member of provincial parliament for York West.

The design of the Engineering Building, by Canadian architectural partnership ZAS Architects + Interiors, reflects the Lassonde School of Engineering’s commitment to redefining engineering education. Conceived as a cloud – a natural object that is both scaleless and ever-changing – the building will hover over a landscape that combines artificial and natural landscape features. A prominent feature of the landscape, a rock inspired by the geology of Georgian Bay, will provide a roof over design workshops and project areas. In contrast to laboratory spaces that support rigorous

engineering research, the project areas will accommodate activities for creative design and production.

A view of the new Engineering Building. Image courtesy of ZAS Architects + Interiors.

Currently a parking lot, the site for the new Engineering Building is in the southwest quadrant of York’s Keele campus, immediately west of the Scott Library, and overlooking the Stong Pond and Arboretum to the south and west.