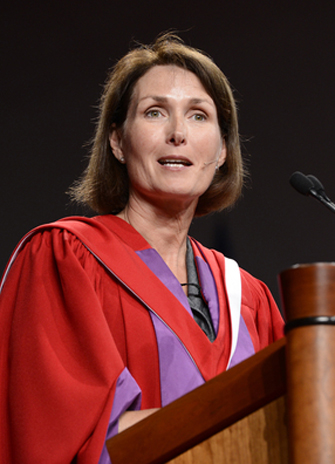 Staying true to her First Nations heritage, Mary Ellen Turpel-Lafond began her convocation address to graduates of Osgoode Hall Law School with an acknowledgement to the First Peoples and the traditional land on which York University’s Keele campus rests.

“I acknowledge the traditional territories of the First Peoples on whose lands we gather at York University the Chippewa, the Anishinabe and the Six Nations. This is a very significant site for indigenous people and I think it is important and fitting that we never forget or erase the sharing that has created a remarkable opportunity to have a university here,” she said.

Turpel-Lafond was at York University’s Spring Convocation ceremonies to receive an honorary doctor of laws degree in recognition for her role as the first Aboriginal tenured professor of law in Canada and her work as a children’s rights advocate.

She has brought dedication and commitment to each of the positions she has held throughout her legal career. From lawyer in private practice to professor of law to judge to advocate for children’s rights, she is a true pioneer, particularly as the first Aboriginal woman appointed to the judicial bench in Saskatchewan.

“How you decide to pursue your career and how you decide to use that voice and skill is really your choice,” she told graduates of Osgoode Hall Law School during ceremonies on Thursday, June 13, “But having a law degree opens up a world of opportunities as there is no old school cap anymore where a lawyer goes into a firm and stays there for 65 years. Lawyers today are agile; they are professional and committed to something very important, the rule of law in society.”

Those who chose the law as a profession are being driven by the ideals of a strong and effective justice system, peace, order, good government and country, stability, respect for human rights and respect, and care and concern for the most vulnerable in equal measure, said Turpel-Lafond.

She spoke about her work reviewing cases that were stayed and never went to trial, and her frustration with having to tell victims that they would not have their day in court. The mother of four said the failed cases never ceased to move her and serve to cement her resolve to complete those difficult reviews and advocate to make the justice system better. “We have many strengths, but we are not a perfect system,” she said.

Turpel-Lafond urged graduates to build on their legal education, which she described as one of the best in Canada. “Have a voice,” she said. “Be vulnerable for success. Even in my career I don’t see the change I’d like to see for children, but I am going to hang in there because this is my system. I care about it and I am going to work on it.”

“The law is an honorable profession if you take it and use it in a good way,” she said, urging the new graduates to work on continuing to improve the profession by building on what Osgoode Hall Law School has given to each of them, the ability, knowledge and drive to avoid “group think, or going along to just get along”.

“Get involved! Work for a good civil justice system and good criminal justice,” she said.

Well-known for her involvement in projects relating to access to justice, judicial independence, and public outreach, Turpel-Lafond received her law degree from Osgoode Hall Law School in 1985, before going on to complete her master’s degree in international law from the University of Cambridge and a doctorate of law from Harvard Law School. She was appointed to the bench in 1998. Currently on leave from the Saskatchewan Provincial Court, she is serving as British Columbia’s first Representative for Children and Youth. Her awards include one of Time magazine’s “Top 20 Canadian Leaders for the 21st Century” and the Perry Shawana Award for the leadership and advocacy she has provided for children’s rights.