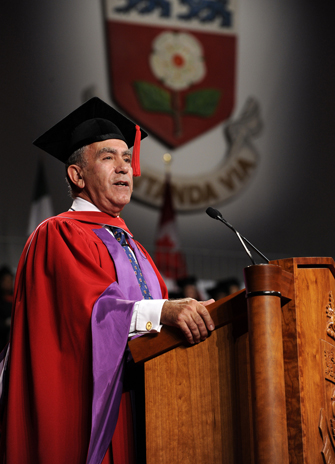 “York has instilled in me the various passions that have animated my life and influenced my career ever since my graduation in 1981,” said Sorbara (BA ’78, LLB ’81), who received his BA from Glendon College and his law degree from Osgoode Hall Law School. He was back at York to receive an honorary doctor of laws degrees during the University’s Spring Convocation ceremonies.

“I was exposed to an all-star cast of teachers…Together, that team inspired in me a passion for this Canadian nation, for issues of public policy and the legal system we use to govern ourselves,” said Sorbara. “My studies at York not only transformed my life, but set a course that has defined my journey ever since.”

Four years after graduating from York, he assumed political responsibility for the province’s postsecondary system as Ontario’s minister of colleges and universities with the Liberal government. He also began a personal campaign to secure approval for an expansion of Toronto’s subway system to York’s Keele campus in 1986.

But what he hopes most for those newly graduating is that they find passion in their lives for family, country and work. Sorbara grew up in what he called a “traditional Canadian family”. His parents immigrated to Canada with their parents shortly before the “dirty ’30s” and, still, they grew deep roots in Canada.

“Each of you has a family – some small, some large, some unique, some traditional – but in every case, it is your intimates that give real meaning to whatever you undertake in life. Make them – make your family – your mission,” said Sorbara. “Make them the object of your passion.”

The second passion is for this country. Although it may seem trite, it bears repeating that Canada is the greatest country in the world,” he told graduands. “It is the world’s most successful experiment in fashioning a multicultural society, one that mixes languages, religions,

traditions, ethnicities and cultures from every single corner of the world. How magnificent is that?”

To put it simply, it is important to leave the place better than it was found. He suggested taking a cue from Aboriginal Peoples across the country “who, despite sometimes appalling conditions, retain a profound understanding of the right relationship with the land.”

The third passion is “to love passionately the work that you do.”

Sorbara left the graduands with the thought that they should continue their relationship with their alma mater. “Make a permanent commitment to remain a part of the York community,” he said. “This is the birthplace for the rest of your lives.”