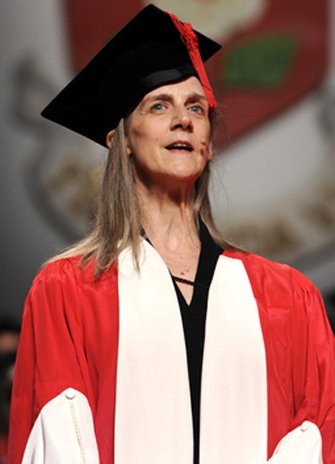 One of Canada’s most eminent artists, was on the York University Convocation stage Monday to receive an honorary doctor of letters degree. Canadian icon Peggy Baker’s work as a dancer, choreographer, educator and advocate for dance was recognized by the University. Baker was honoured for her work to raise the profile of dance across the nation, expand artistic expectations and deepen dance education. Her teaching has inspired several generations of dancers, in the contexts of both

Deeply moved, Baker addressed graduands of the Faculties of Fine Arts and Liberal Arts and Professional Studies. “I am awed to be in the company of so many accomplished and inspiring individuals and I am deeply moved to be the recipient of an honorary doctorate,” she said. “This award is a bold declaration by York University of the vibrancy, relevance and value of the Canadian dance milieu. A community that I am privileged to be a part of.”

Baker spoke with passion about growing up in Edmonton, one of six children born to parents who were gifted and inspired teachers. Her early childhood and youth was spent exploring the wonder of the arts, the discipline of language and the love of performing. These early years provided a firm foundation that allowed her to discover her own gift.

She recounted how during a high school drama festival, she won a bursary that allowed her to travel away from home to attend a summer theatre school. “One of our daily classes, called movement for actors was actually an introduction to the serious and demanding dance technique of Martha Graham.  My teacher was Patricia Beatty, a professional, modern dancer recently returned to Canada from New York City and the founding artistic director of Toronto Dance Theatre,”said Baker. “She spoke like a poet, describing how we were to move and guided our bodies with her hands. Her dancing was fierce, feline with actions emanating from the torso. She moved with weight and fluidity, utterly connected to her body and to the moment.

“The image she presented went beyond all possibilities for female expression that I had ever encountered. Her lessons opened outward to encompass all and everything that moved and excited me set in motion according to her instructions, I had the extraordinary sensation of having discovered my essential nature, I felt both transformed and yet perfectly myself,” said Baker.

Within a few years, Baker had become a student at the New York dance school of Martha Graham. One day in the middle of class, Graham stopped and challenged her students to own their art. “Miss Graham stopped us and demanded ‘Do you want to be dancers?’ Some of the students around me averted their gaze but I looked directly at her, the room seemed to vibrate. ‘Declare yourself to be a dancer now!’ she demanded. ‘Say ‘I am a dancer!’ and then show me!’” said Baker. That encounter and two others with giants in the world of dance were moments of reckoning for Baker.

In her late 20s, she discovered the groundbreaking work of choreographer Lar Lubovitch. She studied for two summers with Lubovitch. An experience she says left her with “a kind of heart sickness” because she felt she would never be good enough to join his group. Out of the blue, she said, she received a telephone call from Lubovitch who invited her to audition for his group. Suffering from impostor syndrome, Baker told him that she could not make it. She received another invitation, this time not for an audition, but instead the iconic choreographer invited Baker to spend an afternoon with him. Again, she lacked the courage to accept. He called again and told her that she needed to do it. She went and ended up touring the world with Lubovitch’s company. “I became through his encouragement and mentorship the dancer he had imagined,” she said.

The next encounter came when she worked with Mikhail Baryshnikov. One day in rehearsal while struggling with a turn, Baker expressed her frustration that it was hard for a modern dancer. “Peggy, there are two kinds of dancers, good ones and bad ones,” Baryshnikov responded.

“Whether through dance, psychology, film making, mathematics or music, what each of us hopes to discover is a pursuit so aligned with our nature that it draws us fully into a matrix of inter connectivity, meaning and purpose. What promotes that likelihood?”

In response, Baker spoke of a letter to the editor her father had read in a newspaper in which a young architect spoke about music education as being essential to his success as an architect because learning to play an instrument had taught him what could be achieved through dedication and hard work. The letter was written in response to proposed budget cuts that would eliminate music and art education in the public school system.  “He identified his joyful studies in music as crucial to his ambition to excel and contribute to work he loves,” said Baker.

“You lucky graduates of these two faculties with the word ‘art’ in the descriptor,” she said. “Your connection to creativity and the potency of culture can nourish every aspect of your life if you take it to heart. If you consider work and creation to be one in the same, you will engage with imagination, daring and integrity in everything you do.”

In 1974, Baker was one of the founding members of Toronto’s Dancemakers. In 1980, she joined the celebrated New York-based Lar Lubovitch Dance Company, where she was a featured performer for eight years. She became the first-ever artist-in-residence at Canada’s National Ballet School in 1990. A decade later, she launched the Choreographers’ Trust, through which she has passed on her solo choreographies. She has also taught master classes through Peggy Baker Dance Projects for more than 20 years.

A member of the Order of Canada and Order of Ontario, Baker is known internationally for her generous and unflagging devotion to art.