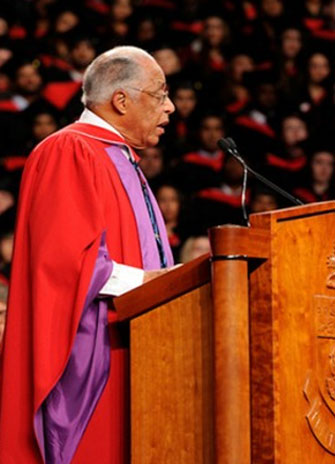 Human rights, race relations and labour relations leader Bromley Armstrong asked York’s graduating class Tuesday whether they had the willingness to try themselves “against the tide of uncertainty or possible failure of being shunned by people who do not share your passion?”

“Mahatma Gandhi once said, and I quote, ‘Justice does not help those who slumber, but those who are vigilant’. Vigilance is something that those of us who work in the civil rights movement know about,” said Armstrong, who

Armstrong fought his entire life for justice and fairness after arriving in Canada from Jamaica in 1947 at the age of 21. “The Canadian government at that time, despite the postwar boom and the growth in manufacturing, did not want black people in this country. You may be surprised to know this that they tried to keep Canada white. They told us that we could not survive in a cold country as we knew nothing about wearing parkas and mittens and boots and toques,” Armstrong told graduands.

“They forget, at least as a human, if you’re cold you’re going to dress to keep warm. I’ve survived 67 years of the country that said I could not survive. And I should tell you, my first year in Canada, I went to renew my passport and I could not renew my visa, and I was surprised that I was deported and didn’t know.”

Shortly after arriving in this country, Armstrong secured a job at Massey-Harris working on the line. He made 62 cents per hour, but soon learned that another worker from Ireland, who became a good friend of his, started at 75 cents per hour.

“I got acquainted with many new Canadians and displaced persons from Europe, all of us seeking new opportunities in a land that was less than welcoming to us. This was an eye-opener and also my introduction to labour relations,

wherein the rights of the worker must be recognized, accounted for and met, both in the workplace and the pay stubs,” said Armstrong.

“The workplace was a reflection of society where women, minorities and those with disabilities were ignored completely, treated as second-class citizens and banned outright, in some cases, from participating in any activity in their community. Minorities were prevented from joining social clubs, they were denied jobs based on their race, they were not able to rent apartments or to buy homes of their choice in their respective communities. But I knew this had to change. And I knew that justice could only come through action.”

And change it did, but not without a fight. Armstrong became a member of local 439 of the United Automobile Workers and represented the local delegation in 1949 and 1950. He urged then premier of Ontario Leslie Frost to enact legislation to prohibit discrimination in employment and in the rental of apartments, and to ensure equal services for everyone in places that were open to the public. Together with the Ontario Federation of Labour and the Toronto and Lakeshore Labour Council, they gathered documentation. That included Armstrong posing as a couple with a black woman and visiting apartments for rent. “We were often told the place was rented, but 15 minutes later when a white couple went to rent the same place, they were shown the apartment. In all testing we did on apartments, we were never shown an apartment. They were always gone,” said Armstrong.

They were successful all the same in having legislation enacted to protect the rights of minorities. Frost enacted the Fair Employment Practices Act in 1951 and the Fair Accommodation Practices Act in 1953. “It meant a legal commitment to hiring and in the provision of services to the public,” said Armstrong. But not everyone followed it. “In the town of Dresden, Ontario, they still refused to serve blacks despite the high number of African Canadian citizens who lived in that area.”

Armstrong, along with several others, including journalists, visited two of the places that discriminated against African Canadians. Because of that visit, those two buesinesses were fined and a court case ensued that lasted more than a year. But the legislation held. “It was a big achievement for civil rights in this province,” said Armstrong.

“The goal of justice requires sacrifice, suffering and struggle, tireless exertion and passion, and passionate concern of dedicated individuals,” he said. “Today, we see a litany of social issues affecting our communities regardless of our background.[…]We cannot turn away nor can we consider the job finished. We must bring passion back to the community, to the table of discussion, and open up ourselves to being agents of change.[…]Do you have the passion?  If you accept the role and become an agent of change, this is what you’ll be up against, but the rewards will be beyond measure.”