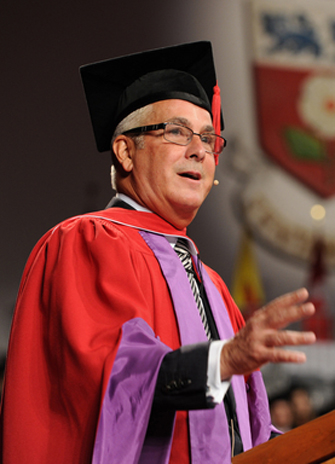 Entrepreneur and York alumnus Douglas Bergeron (BA ’83) returned to his alma mater on Monday, June 10 to receive an honorary doctor of laws degree as part of convocation ceremonies for graduates of the Lassonde School of Engineering and the Faculties of Science and Environmental Studies.

One of the Lassonde School of Engineering’s most successful alumni, Bergeron graduated in 1983 with a degree in computer science and embarked on a remarkable career in the software and telecommunications sector, and became a rising star in Silicon Valley. With his innovative spirit, he combined his understanding of technology with the essence of entrepreneurship to create profitable enterprises. His accolades include the 2007 Ernst and Young Entrepreneur of the Year award.

In his remarks to the graduates, Bergeron congratulated them and spoke about how far Canada had come since he sat on a similar convocation stage 30 years ago. “This is an age of unparalleled opportunity never before experienced by Canadians of previous generations,” he said, urging graduands to embrace the opportunities presented by what he called “Canada’s golden age”. He asked grads to focus their lives on making a contribution to society, business and the world rather than just participating in their lives.

“Today, Canada has the lowest debt to GDP ratio of the top 10 economies. Canada is the economic and fiscal envy of the world,” he said. “This brilliant economy has a second insight because Canada has put into place the most innovative forward-thinking, welcoming and pro-immigration policy in the world, one that is aimed at building Canada of the future. It is engineered to attract the best the world can offer.”

The individual contributions by a diverse population either one by one or in groups are what makes Canada great, said Bergeron. “The greater the diversity and the more welcome we are the better we become.  That spirit of Canada has been wrapped around my wings as a business leader travelling the world for the past 30 years. I have visited scores of countries and filled six passports with stamps. But one thing has been consistent,” he said. “I would be in some far-flung country and I would hand my Canadian passport to a border inspector and hotel clerk and they would look at me and smile and say, ‘You are from Canada, I heard that is a beautiful place with wonderful people.’.”

Bergeron told graduates that their environmental studies, engineering or science degrees were their international passports and they spoke a universal language based in logic and mathematics built around a fundamental belief in building or making things better. “As York graduates and Canadians, you are now citizens of the world,” he said.

He thanked parents for giving Canada bright new graduates. “You have not just participated, you have contributed,” said Bergeron. “Graduates you have a special obligation to give back to society. Go and spawn an idea or invention, start a business, hire people and make a fortune, shamelessly. Give back, either financially or with your own time and talents. Don’t just participate, contribute.”

Canada is different he said. “It took 30 years of traveling around the world and watching other societies work and interact with each other, and listening to how much they admire Canada,” he said.  “You will each get your own series of lucky breaks and unfair setbacks. They will all cancel themselves out.” The real winners are those who pick themselves up after a setback and move on to new and better opportunities, he said. He urged grads to revel n the good times and view the setbacks as opportunities to reflect and reinvent, keeping true to their entrepreneurial spirits.

“Love what you do or just don’t do it. Whatever you touch as engineers, scientists or environmentalists, remember that the person who touches it after you, builds from your work, benefits from your passion and involvement. Don’t just participate, contribute,” he said.

Bergeron has championed causes in support of higher education, particularly in the areas of disease-related research support services, entrepreneurship, women in technology, and STEM education. He has also been a major presence in the battle against multiple sclerosis. Dedicated to philanthropy, entrepreneurship and social responsibility, Bergeron and his wife, Sandra, recently donated $2 million to York University to create the Bergeron Entrepreneurs in Science & Technology (BEST) program, with the aim of nurturing some of Canada’s brightest minds: individuals interested in effecting change through entrepreneurship and technology.