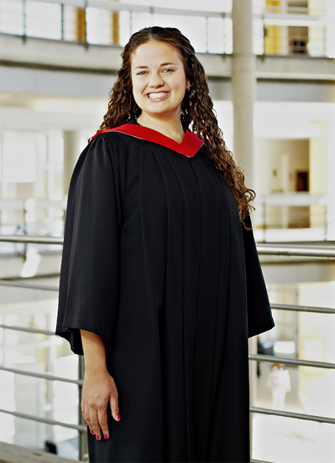 Faculty of Science graduate Michaela Gasner believes it is important to experience everything that university has to offer. By doing so, Gasner has not only excelled in her studies, she’s also enjoyed the camaraderie and connection forged as a volunteer peer mentor for Bethune College.

The 22-year-old Gasner earned top marks in her program. She graduates this spring with an honours bachelor of science degree, with a major in biology and a minor in psychology. If that wasn’t enough, this young dynamo is also the recipient of a Governor General’s Academic Medal and is headed to medical school this fall.

Awarded for outstanding academic excellence at the undergraduate level, the Governor General’s Academic (Silver) Medal is the most prestigious award given to undergraduate students in Canadian universities. The medal will be presented to Gasner by York University and will be accompanied by a personalized certificate signed by Governor General David Johnston.

When she looks back over the past four years, Gasner says it’s difficult to choose a favourite memory because there are so many. She speaks with great pride about her work as a peer mentor, peer tutor and a member of the Faculty of Science Student Caucus, saying the volunteer experience was deeply meaningful. “I volunteered as a peer leader and peer tutor at Bethune College and I did that for a number of years. It was something that I found really enjoyable. As well, for the past year I was a member of the Student Caucus for the Faculty of Science. It was very interesting because I got to sit in on meetings with faculty members and I got to see behind the scenes,” she says.

Two summers ago, Gasner worked as a research assistant on a  Natural Sciences and Engineering Research Council of Canada (NSERC) research project in one of the labs at York University. That experience whetted her appetite for research, and in her fourth year she conducted her own research in one of the labs in the Department of Biology. “I was studying the mechanisms of the secretion of a hormone called ghrelin, which stimulates appetite. It was only discovered a few years ago, and I was researching which proteins help to become secreted from the cell. It was an amazing experience, ” she says.

“I really liked  my third and  fourth year courses because they offered deeper learning, I took an abnormal psychology class that was wonderful because one of the projects we did was write a hypothetical grant proposal, which I found to be a great experience,” she says.

Her message to students she’s encountered during her peer mentoring work has always been consistent: “Study something you enjoy, something you love. It is always easier to learn when you really want to know,” she says. “It’s your life, and it is up to you. York University provides all the tools and resources, they are there to be used.”

As she looks forward to medical school, Gasner says she’s not sure whether she will specialize or pursue a career in family medicine or medical research. “While I’m keeping my options open for now, I am looking forward to experiencing everything that medical school has to offer,” she says.