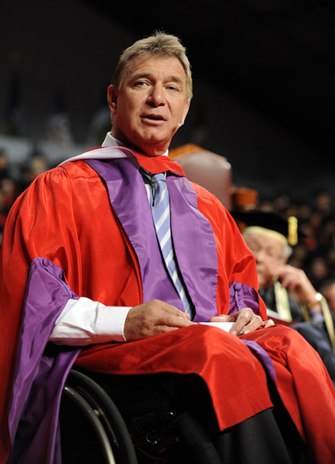 Rick Hansen, known globally as the “Man In Motion”, is often asked if he would give up what his life now to have use of his legs again. His answer: “Not on your life.”

Hansen was 15 years old and coming home from a fishing trip when the pick-up truck he was riding in crashed, crushing his spinal cord. He was up until that point an all-star athlete determined to represent his country at the Olympic Games one day.

“My whole life revolved around physical activity and the use of my legs,” he told the Faculty of Health graduands. But the accident seemed to put an end to that. “My spine was shattered. The doctors told me I would never walk again…All of my hopes and dreams seemed to be shattered along with my spine. Personally, I would have sold my soul for the use of my legs at that moment, I was so desperate to get it back.”

But Hansen’s dreams were not finished, merely altered. He went on to compete and win medals at the highest levels. His Man In Motion World Tour saw him wheel more than 40,000 km through 34 countries over 26 months. In 1987, he established the Rick Hansen Foundation, which has raised some $280 million so far, to help fund research into spinal cord injuries and to create more accessible communities.

Following the accident, Hansen said he was surrounded by people – medical and health professionals, family and friends. “They did not give up on me. They encouraged me to set new goals and chase new dreams.”

His physical education teacher in high school encouraged him “to believe that nowhere in the definition of an athlete does it say you need to use your legs in order to be one. And it’s not what happened to you it’s what you do with it that counts,” he said. “All of my hopes and dreams were waiting for me if saw, not what I lost, but what I had and what was still in front.”

In university, he remembers one professor, saying, “Anything is possible, but not everything, and the key to excellence is focus. I came out of that room and I decided to refine my focus and my sport and do everything possible to get to that place to be the best I could be.”

One of Hansen’s colleagues in human kinetics at university became a good friend and later his coach, who helped him achieve his dream of winning Paralympic gold. He realized making a difference isn’t just about talent; it’s about passions and experiences.

So would he give the life he’s built now back for the use of his legs? Not a chance.

“I now realize that the definition of meaning and purpose in your life is to be filled and surrounded by family and friends and love and community, to have passion and to wake up every morning with goals and dreams, and to know that you can and are making a difference, to try and leave this world a little better place than when you came,” said Hansen.

“Each and every one of has the ability to be fueled by hope and inspiration.”