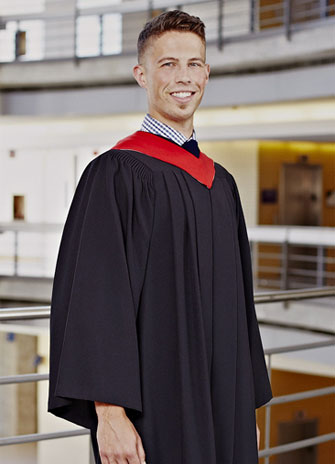 Passion is the driving force for Markian Farenech, this year’s silver Governor General’s Academic Medal winner at the undergraduate level for outstanding academic excellence. Without the passion to pursue his goals and dreams, Farenech says he wouldn’t have achieved success at such a high level.

“If you’re passionate about what you do, you’re going to succeed, most likely,” says Farenech. “It’s that passion that drives you to work.” Spending evenings and weekends reading textbooks and studying, while a

lot of hard work, didn’t feel onerous because he was doing what he loved – learning about the human body. Passion, dedication and hard work go a long way, he says.

The silver medal is awarded for outstanding academic excellence at the undergraduate level and is the most prestigious award that students in Canadian schools can receive. The medal will be presented on behalf of the Governor General by York University, along with a personalized certificate signed by Governor General David Johnston.

As a student of the Faculty of Health’s School of Kinesiology & Health Science, Farenech’s studies fed his fascination with neuroscience and cardiovascular physiology – the brain and the heart. “Those organs are so complex and I’m drawn to complexity,” he says. “It’s a never-ending learning process.”

And although many have prodded him to pursue medical school, Farenech says his ultimate goal is to open a fitness training facility with his older brother Andrew (BA ’10), also a York alumnus. “I have to love what I do,” he says. And that doesn’t include medicine. Sports, however, has always been a major part of his life – he’ll play pick-up anything, though when pressed, he admits hockey and golf are his favourites. Running a training facility would bring all his passions together, including his interest in the workings of the body’s skeletal muscles. He is putting some of that into practice now as a volunteer with strength coaches at York, whom he really respects.

Training others would also satisfy the teacher in him. Initially, this City of Mississauga native saw a future teaching high school physical education. Now, he wants to teach the general population how to lead a fit and healthy lifestyle. “Training is such a huge component of my life,” he says. And he often feels the need to offer tips and advice to others at the gym where he works out. He naturally gains satisfaction from helping others achieve their goals. “That is payment beyond the monetary for me,” he says.

He credits York University not only for helping him define what he wants out of life, but for shaping him into a better person. “You come here to learn and be educated not just about your subject matter, but life in general.” A university “forces people to think in different ways. It gives you the opportunity to interact with so many different people and talk to professors who are experts in their field. You can learn so much from them. It’s amazing,” says Farenech.

During his time at York, Farenech also earned a University renewable entrance scholarship, a YUFA Undergraduate Scholarship, a Bryce M. Taylor Book Prize and a Stuart G. Robbins Book Prize. He was also featured in YorkU magazine’s December 2009 issue as a top student, having achieved the highest cumulative grade point average in the Faculty of Health.