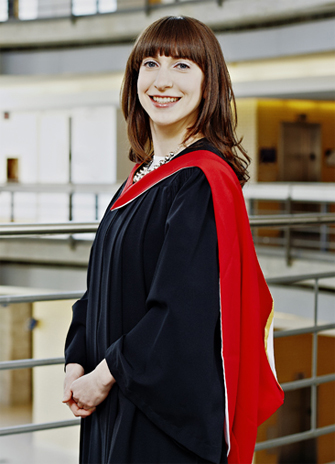 Her career as a teacher in an

Orthodox Jewish school in North York was the first step in Naomi Greenwald’s journey to realizing her vocation. As a first grade teacher, Greenwald says she saw a need for a clinical child psychologist. In response to that need, Greenwald decided to pursue a bachelor’s degree in psychology at York University so that she could learn how to help children in her community.

Now, after juggling her studies with a half-time teaching commitment, Greenwald has graduated at the top of her class and is the Faculty of Health’s Governor General Academic Medal winner at the undergraduate level. Thrilled with the recognition of her hard work, Greenwald is also pragmatic about the huge personal commitment needed to achieve such stellar results while carrying a heavy work load. “Passion is what has kept me going, but there is also a lot of study, study, study,” she says with a big smile. “I guess you could say that I am driven, but to succeed it’s not just about being smart, it is also about hard work.”

Awarded for outstanding academic excellence at the undergraduate level, the Governor General’s Silver Medal is the most prestigious award given to students in Canadian universities. The medal will be presented to Greenwald by York University and will be accompanied by a personalized certificate signed by Governor General David Johnston.

The excellent reputation of York University’s psychology program was a big attraction for Greenwald as she considered her postsecondary choices. In addition, she says, many of her friends had attended York University and its multicultural community was an important factor. “I like that York University has a diverse student population and I feel very comfortable here,” she says.

There were many “Aha!” moments during her years as an undergraduate student. A profile of her in a 2008 top undergrad achievers edition of YorkU magazine confirmed in Greenwald’s mind that she was on the right path and accomplishing what she had set out to do. Another “Aha!” moment came when she had to decide between a bachelor of science degree and a bachelor of arts degree in psychology. “York University offers both options,” she explains. “I had to choose and I think I was scared by some of the science courses, particularly calculus. I did well on the tests and it confirmed in my mind that I could do this and do the route that was harder.”

Greenwald dreams of one day having her own private practice. Her experience and understanding gained by growing up and working within the Orthodox Jewish community means she will be able to offer a special dimension to her work as a clinical child psychologist. Another passion for her is the desire to assist families coping with the grief that follows the death of a child.

She’s already begun work on the next stage in her journey to realizing that dream as she pursues a master’s degree in child psychology at the Ontario Institute for Studies in Education, this time as a full-time student.