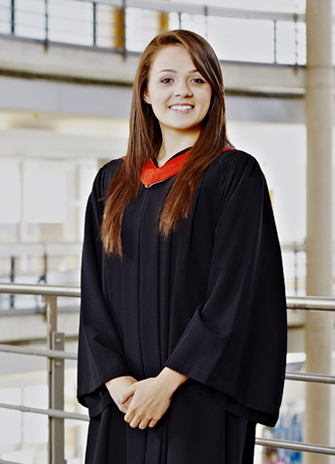 Julia Salzmann loves Star Trek, Sophie Kinsella books and everything to do with policy and administration. It may seem like an unlikely combination, but this Dean’s Honour Roll student is a well-rounded people person with a desire to effect change.

She is also this year’s winner of the Murray G. Ross Award, not only for her scholarship, but for her outstanding contributions to undergraduate student life. She will receive the award during Spring Convocation ceremonies, along with a

specialized honours bachelor’s degree in health studies from York’s School of Health Policy & Management in the Faculty of Health.

Salzmann was one of seven students nominated this year for the award, established in 1962 in honour of York’s first president, but the only one to win. She says she was dumbfounded and “completely humbled” upon hearing the news. “Being involved here at York, you get to see all the things that are going on[…]and some of the things that these students are up to are just absolutely amazing.”

But Salzmann is no slouch. She already won the inaugural Robert J. Tiffin Student Leadership Award earlier in the year, and now the Murray G. Ross Award. Both awards speak to her involvement at York, including being instrumental in starting the University’s first online undergraduate journal, Healthy Dialogue, with Professor Tamara Daly. “It’s important for undergraduate students to have an opportunity to submit their original work to a journal, go through the review process and have it published,” says Salzmann. “It’s a great opportunity for undergraduate students to gain a competitive edge.”

She also helped spearhead the inaugural York University Conference on Aboriginal Affairs Now (YUCAAN) with other York partners, including the Centre for Aboriginal Student Services, the Aboriginal Students’ Association at York and the Echo Chair in Women’s Mental Health Research. It was an opportunity for the York community to learn about aboriginal culture. “We were so happy to hear the feedback from students saying they’ve learned so much and that going forward this is an area that they’re interested to study more,” she says.

Salzmann will go on to earn a master of public policy degree at the University of Toronto. She praises York for giving her an opportunity to prove herself. “If it wasn’t for coming to York, I wouldn’t be the person I am today.”

That person is confident, gregarious and counts travelling as one of her passions, which she figured out how to do on a tight budget by visiting Toronto’s distinct areas – Chinatown, Little Italy, Greektown and so on – where she immerses herself in the culture, entertainment and food.

As a diversion from her heavy study load, she turns to Sophie Kinsella, author of the Shopaholic series, to transport her even further. “Her books are so fun and it gives me a break,” says Salzmann, who is also a little embarrassed by this revelation, but it speaks to her capacity to shed her serious side.

Eventually, she hopes to find herself back at York as a professor. “My professors have had a profound influence on me,” says Salzmann. And she wants to do the same for students. “I keep telling my professors, ‘I’ll be back’.”