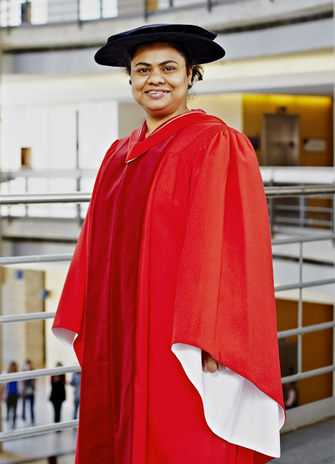 Bhargavi Duvvuri (PhD ’12), winner of this year’s gold Governor General’s Academic Medal, is nothing if not dedicated to unlocking and mapping the mysteries of human immune diversity in the context of immunodeficiency and autoimmunity.

She is striving to discover further ways to understand the complex mechanisms of autoimmune disorders with interdisciplinary approaches so that diagnosis and treatment can be better tailored.

that students in Canadian schools can receive. The medal will be presented on behalf of the Governor General by York University, along with a personalized certificate signed by Governor General David Johnston.

While at York’s School of Kinesiology & Health Science in the Faculty of Health, Duvvuri researched why and how some regions of antibodies mutate and not others, and whether the immune system reacts to DNA changes over a person’s lifetime. It does. But then why does the immune system sometimes overreact, creating an autoimmune disorder? She is working on that answer. Already, this multiple award-winning graduate has pinpointed important areas for further study under the direction of her PhD supervisor, York University Professor Gillian E. Wu.

In her PhD years alone, she published 11 research articles in peer-reviewed journals. She has previously won a York President Susan Mann Dissertation Scholarship given to encourage and assist outstanding students in their final year of doctoral study. In addition, she has received two Ontario Graduate Scholarships and travel fellowships from York University, the Canadian Society of Immunology and the Canadian Institutes of Health Research.

Duvvuri has a master’s degree in biotechnology from India and received a junior research fellowship through the Indian Council of Medical Research. She chose kinesiology and health sciences at York University for its interdisciplinary research focus. With her interest in immunology and bioinformatics, she also chose Wu, a reputed immunologist, and is glad she did.

“The major strength throughout my PhD has been my supervisor because she allows me to be independent and to try my own ideas, to test my own ideas,” says Duvvuri. “So that’s how I ended up having 11 publications, not just from my PhD, but I was also able to do most of my research collaborating across York and with other universities.”

Duvvuri is now conducting her postdoctoral research in the area of childhood arthritis at the Hospital for Sick Children with funding from the Arthritis Society. “I do similar research there as I did at York, only broader,” she says.

The same year she graduated from York with the necessary grades to win the Governor General’s Academic Medal, Duvvuri also became a Canadian citizen. It was a good year, she says.

Without any other close family in Canada, Duvvuri credits her husband, Venkata Duvvuri, a York alumnus, with being a source of support for her throughout her studies. As a young mother working on her PhD in a foreign country, she says it has been crucial to her success. Their young daughter Anasuya, who was one month old when Duvvuri started her PhD, was a frequent visitor to the University, making studying at York a family affair.

“I’m very honoured to receive this award,” says Duvvuri. “It’s like proving myself here in my new home, but they’re also celebrating in India.”