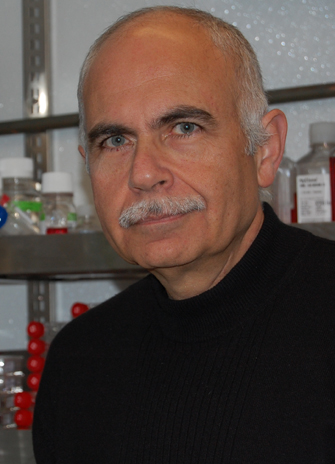 Benchimol, who is chair of the Department of Biology at York University and Canada Research Chair in Biomedical Health, is internationally recognized for studies focusing on the p53 gene. Specifically, his research focuses on the inactivating mutations in the p53 gene that contribute to cancer development. He was among a group of researchers that discovered new genes affecting p53 function.

Progeria or Hutchinson-Gilford Progeria Syndrome (HGPS), is a rare, fatal genetic condition characterized by an appearance of accelerated aging in children, with average life expectancy being 13 years. It is caused by a mutation in the gene called LMNA (pronounced “lamin-a”). The LMNA gene produces the lamin A protein which is the structural scaffolding that holds the nucleus of a cell together. The abnormal lamin A protein that causes Progeria is called progerin. Researchers now believe that progerin makes the nucleus unstable. That cellular instability leads to the process of premature aging and disease in progeria.

“We’re very pleased to hear that Dr. Benchimol received this grant,” says Robert Tsushima, associate dean, research & partnerships, in York University’s Faculty of Science. “His research is critical, both in terms of finding a cure for progeria and furthering our understanding of cancer.” The p53 gene is the most commonly mutated gene in human cancers.

Benchimol’s research will build upon preliminary data and test novel hypotheses regarding the role of p53 in mediating the premature aging shown by cells from Hutchinson-Gilford Progeria syndrome (HGPS) patients.

His work, in collaboration with Keith Wheaton, a postdoctoral fellow in his laboratory, will test the hypothesis that progerin causes replication stress, which in turn elicits a growth arrest, and that p53 acts downstream of the progerin-induced replication stress. The hope is that researchers can determine how progerin and p53 collaborate to elicit this cell-aging response.

Prior to joining York University, Benchimol conducted research at the Ontario Cancer Institute and the University of Toronto.

The Progeria Research Foundation (PRF) funds medical research aimed at developing treatments and a cure for progeria. The foundation also has its own cell and tissue bank that provides the biological materials researchers need to conduct their experiments. Additionally, PRF has established a medical and research database to supply physicians and families with medical recommendations for cardiac care, nutrition and other medical issues to help children and adults with progeria have a better quality of life. PRF is also involved in progeria clinical drug trials testing potential treatments.