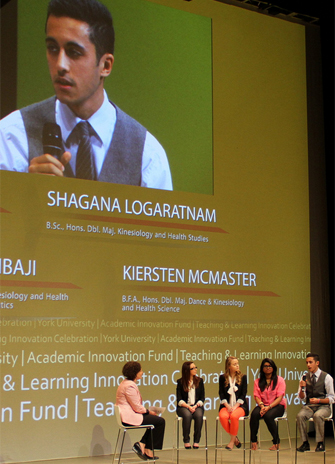 A University-wide eLearning support system that can be scaled to meet demand and resources, an experiential education prototype for all faculties and a comprehensive program to help new students make the most of their university studies, were just some of the innovations unveiled at a celebration of teaching and learning on May 9 in the Tribute Communities Recital Hall on  York University’s Keele campus.

The event was a show-and-tell, with York faculty, staff and students giving voice to the results of 40 imaginative projects that were part of the 2012-2013 cycle of the University’s groundbreaking Academic Innovation Fund (AIF). During a full day of presentations, the audience, which included faculty, staff and students along with representatives from the Council of Ontario Universities, the province’s Ministry of Training, Colleges & Universities, the York Region District School Board and the Ontario Institute for Studies in Education (OISE), witnessed how York University is leading change in teaching, learning and the student experience.

system has experienced in the past,” said York President & Vice-Chancellor Mamdouh Shoukri (right) in his opening remarks. He spoke about the new normal in postsecondary education, one that is constantly in flux due to the influence of technology. “Change is the new normal and it is very important for the University to continue to create and follow new trends,” he said, noting that the innovation fostered by the AIF was critical to the University and its ability to stay ahead and lead this new normal.

The teaching and learning celebration featured a multimedia extravaganza complete with a subway busker, Faculty of Health Dean Harvey Skinner partaking in an experience-based lesson in break dancing and PeRLS — a new learning management software demonstration — showing the power and potential of eLearning. The day was broken into three parts with the morning sessions focusing on eLearning and experiential education. The afternoon was devoted to the new student and first-year experience project cluster.

Using a subway analogy, organizers were able to illustrate how each of the project clusters was similar to a subway line with stops along the way showing the progression of projects. Specifically the three project clusters or systems were envisioned as being distinct but interrelated train lines with destinations along each line reflecting the projects. The goal of the AIF is to bring the best of pedagogy in eLearning and experience education together with a positive launch into University studies and a powerful first-year experience to give York students a superior education, one that keeps ahead of the new normal and equips students with the tools and knowledge they need to succeed in University and beyond.

“The AIF has been in place for two years, we’ve had $2.5 million to invest each year,” said Susan Vail (left), York’s associate vice-president teaching & learning, who is responsible for AIF oversight. “We’ve had hundreds of applications for projects and through a careful selection process; we have been able to support 52 projects over the last two years. The funding has ranged from $10,000 to $200,000. All of the projects focus on teaching and learning, and/or the student experience.

“Those who have been working in projects in the eLearning area have been meeting regularly as a large group to share ideas and results with each other,” said Vail. “They are working together to create common approaches. The same has been happening with experiential education and with new student transition.”

Vail said that throughout the AIF, project teams have focused on collaboration instead of competition, which has been the traditional “norm” in the highly competitive postsecondary environment. Collaboration and sharing have been potent factors in the fund’s ability to bring sweeping, pan-University change.

York Vice-President Academic Rhonda Lenton presented the morning keynote titled, “Challenge of Change in Higher Education” to launch the day’s activities and set the context for the audience about what the audience would see and hear during the day. Lenton outlined the social, cultural and historical aspects that have been affecting higher education. Pressures such as the expectation for continued growth, escalating costs, increasing budget cuts, a focus on research innovation and teaching are all fueling the requirements for innovation and change. York University is meeting these pressures head on with initiatives such as the AIF, which has supplied the important seed money to allow for projects to proceed, thereby making change possible.

“We are going to need to pull together and think about how we can, as colleagues, can share innovations. Our ultimate success rests with our students, we need to attract high quality students to York University and give to them the best student learning experience that we can. We are not only contributing to our own well being, but we are producing the next generation of young people who will have the ability to take on the increasing challenges that we see coming,” said Lenton. “Fundamental transformative change is not easy.  If people get together, work collaboratively, we can make a difference for our students.”

The eLearning segment began with a video featuring students talking about eLearning and the advantages it provided. Over and over again, the students highlighted the importance of teamwork, collaboration, being able to work online to develop new ideas and learn when they were best able to learn. It wrapped with a demonstration of PeRLS, a new eLearning system developed at York University, which helps students chart their learning through collaboration, reflection and inquiry.

Following was a powerful session on experiential education, which featured Faculty of Health Dean Harvey Skinner learning to break dance and a virtual learning session involving the Montreal-based dance group Tentacle Tribe teaching students to dance, all by remote connection. The teachers were able to watch the students practice their moves, they provided real-time coaching and encouragement. The session ended with new graduates talking about their life after graduation and how experiential education had provided the some important skills that helped them land employment in their chosen fields.

The afternoon session kicked off with a keynote from Janet Morrison, vice-provost of students. She spoke about the power of building connections and engagement with students, she referenced her own experience as a first-year student and how it shaped her. The session that followed was devoted exclusively to a large, pan-University project focused on giving new students a positive transition into University. It was punctuated by a series of scenes from a student play that is delivered to new students and their parents during orientation.

Experiential learning in action as students learn to break dance

The session highlighted the support systems available to students that have been made possible by the AIF, including a 24/7 Learning Commons, a virtual orientation and advising system, in-class peer mentoring and the positive connections fostered by orientation events, including Destination Graduation, hosted by the Faculty of Health. The event was created to bring new students into an informal “Health Olympics” where they could meet their professors. Kinesiology senior lecturer Merv Mosher said that organizers expected perhaps 30 to 4o students. Instead, more than 700 first-year students turned out for the event.

Throughout the day, a series of expert responders repeated over and over again how impressed they were by what the AIF had and will achieve. Bonnie Patterson, president & CEO of the Council of Ontario Universities, summed up the responders’s reactions to what they had witnessed in the Teaching and Learning Celebration.  “Let me congratulate York, as I was sitting here, I never thought that I would find myself both on Twitter and sending photos from my BlackBerry to my office with ‘Get this out on the Internet!’,” said  Patterson.

“Congratulations to everyone,” she said. “Somehow we have to spread this way of thinking about what we do as academics in the academy with our students. You are reinventing the face of the classroom experience into something quite different. You are redefining relationships between teacher and students and teacher and support systems that are available. You are using tools in a new and inventive way. This is music to my heart because everything that I have read about deep learning and what causes that to happen is through both active and customized learning opportunities. What we saw today is a real example of deep learning and collaboration in action.”

Susan Elgie, research consultant for the Higher Education Quality Council, said:  “This room was full of buzz, I just thought it was so impressive!”

Stay tuned to YFile for a link to the archived version of the full proceedings from the day will be made available in the near future. This week,  YFile‘s Thursday and Friday issues will offer some of the key moments from each of the three sessions and more expert responder comments.

To learn more about the many important projects and initiatives funded by the Academic Innovation Fund, search AIF on YFile or visit the AIF website, where you will find a full range of stories and videos about the inspiring projects that make up this York University initiative.