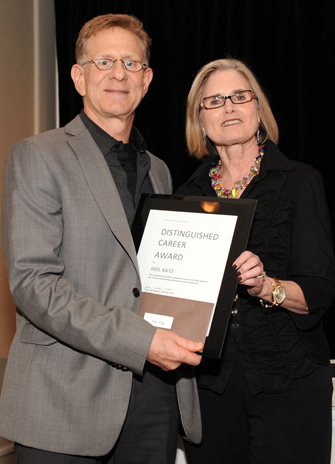 Psychology Professor Joel Katz, who holds a Canada Research Chair in Health Psychology, was recently honoured with a Canadian Pain Society Distinguished Career Award in recognition of his outstanding achievements and contributions to pain research and pain management over his career.

Katz received the award at the Canadian Pain Society‘s annual conference earlier this month where he delivered a keynote address, titled “This Won’t Hurt a Bit: Reflections on a Painful Career”. It is a career spent researching how pain moves from acute to chronic and how it can best be prevented and managed. This includes pain in infants, children and adults.

“I am proud to be joining the ranks of the truly distinguished members of the Canadian Pain Society who have received the award in the past. I can’t think of a more meaningful way to have one’s scholarly work recognized than to be selected

by one’s peers for such an award,” says Katz of York’s Faculty of Health, whose interest in pain came about after accepting a position as a research assistant early in his career at the Montreal General Hospital Pain Centre under the direction of psychologist Ronald Melzack.

It was at the pain centre that Katz came across amputees who reported phantom pain that resembled the pain they experienced in the limb before amputation – a phenomenon he subsequently called somatosensory pain memories. “These pain memories are distressing replicas of pre-amputation pains that are referred to the phantom limb after amputation and are described as identical in terms of body location, quality of sensation and sometimes even intensity,” says Katz.

At the time, these somatosensory pain memories raised a question that Katz has subsequently spent years trying to answer. He wondered whether it was possible that just as a pre-amputation pain comes back to haunt the amputee as a phantom limb pain memory, the very act of cutting nerve, tissue and bone during surgery sets up a similar memory-like mechanism that persists after surgery and contributes to heightened postoperative pain, he says. And because the patient was under the effects of a general anesthetic during surgery, he or she would have no conscious recollection of the qualities of the surgical pain and so couldn’t say that the two pains were similar.

This lead Katz to conduct a series of studies testing this idea. He compared patients who received epidural analgesia before surgical incision with those who received the same treatment after the incision. “The hypothesis was that postoperative pain should be less intense in the group that received the pre-operative epidural since the afferent injury barrage brought about by surgery would have been prevented from reaching cells in the dorsal horn of the spinal cord that send their injury messages onwards to the brain,” says Katz. And this is in fact what he found.

These findings and others like it provided evidence that one component of acute postoperative pain involves a memory-like mechanism and that by preventing noxious inputs during surgery from reaching the spinal cord it was possible to block its formation and reduce postoperative pain intensity and the amount of pain killers patients need.

It is in part because of Katz’s work in the areas of preemptive and preventive analgesia that pain medication is most often given to patients prior to, as well as during, surgery to help minimize the intensity and incidence of acute and chronic postoperative pain.

Katz credits Melzack with providing just the right combination of support, encouragement and opportunity for him to flourish as a graduate student and beyond. “I am especially pleased about the award because Dr. Ronald Melzack, my former PhD supervisor, mentor, colleague, friend and a pioneer in the field of pain, was the very first recipient of the CPS Distinguished Career Award in 1994,” says Katz.

One of Katz’s nominators for the award, psychology Professor Gordon Asmundson of the University of Regina, a Fellow of the Royal Society of Canada, described Katz as “an outstanding scientist, educator and practitioner whose contributions to the field of pain are broad ranging and of exceptional quality and impact.”

Katz has published more than 150 full-length, peer-reviewed articles, 48 book chapters and 20 published letters. His research appears in the top journals, including The Lancet, Journal of the American Medical Association, Pain, and Anesthesiology. See a write-up of one of his most recent studies in the April 18 issue of YFile.

“The impact of his corpus of work is truly impressive; indeed, Dr. Katz is one of the most cited Canadian health researchers and amongst a small cohort of Canadian psychologists who have had an immense influence on understanding and improving pain conditions associated with considerable personal suffering and societal costs,” says Asmundson.

“Dr. Katz’s contributions are the stuff of a distinguished career; yet, it is a career of an impressive man who has many more years of important service and contributions remaining.”