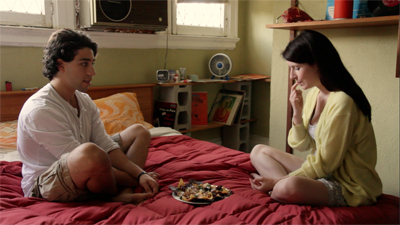 York University Fine Arts students in film, theatre and design have teamed up to produce The Fall, a dramatic web series about a group of young adults in the process of coming of age – much like the creators themselves.

The series, comprising eight episodes, each five to nine minutes long, launched May 15 on thefallwebseries.com and continues weekly until July 3.

The Fall follows seven young adults through the ups and downs of relationships, their struggles and the truths they confront in the process of growing up. The characters include a quartet of high school students, two university roommates and a post grad whose lives intersect in a complex web ranging from family and friends to love interests and enemies.

In this scene from <i><b>The Fall</b></i>, Kieran (Jarred Bronstein) and April (Charis Ann Wiens) flirt over a dish of nachos

More than a dozen York students and alumni are involved in the series. The co-creators and producers are undergraduate film students Kelly Paoli and Lester Milado, who will be graduating this fall, and Steffi Tupe, who will receive her BFA in film in June. They recruited student directors from their program, who in turn recruited cinematographers. The cast includes students from the Departments of Film and Theatre. The series’ social media components and marketing are designed and managed by recent design grad Valida Jafarov (BDes ‘12).

Paoli is wearing many hats for The Fall, including executive producer, lead writer (or show runner, as the pros call it), acting in the role of Izzy, directing an episode, and helping out with art direction and production management for many of the shoots.

“We initially started this web series to gain more experience and have an independent project in our portfolios,” she said. “But as we got involved in profiling the characters, working on the story arcs and going through development, it became more and more of a passion project. The idea of creating a series instead of the short films we’d been developing in school was also incredibly appealing. It was something new for most of us – a really exciting challenge.”

Orlando (Dylan Crewe-Young) is heart broken, but his roommate Mark (Brendan Flynn) has other priorities

And challenge is a key theme of the show. Character-driven, the plot follows the students as they deal with real-life issues that The Fall’s creators witness in their own social circles: relationship dynamics from intimacy to infidelity; drug, alcohol and tobacco use and abuse; career uncertainty; and making sense of one’s values and path amidst the drama and chaos of it all.

The concept for the series came together in early summer 2012, and it was shot on weekends throughout July and August last year. As the most of the team members got caught up in working on their graduation films once they returned to classes last fall, The Fall was put on the back burner until this spring. It was then shipped off to Toronto Sound, a busy location sound and sound design studio run by York film alumnus Adam Clark (BFA Spec. Hons. ‘11), and editing and sound design could begin.

Editor and post production supervisor Holden Mohring, who is set to graduate with his BFA in film next month, edited half of the season himself and managed the deadlines and delivery for the other editors. He got involved because he wanted to work collaboratively with a large group, and was interested in getting his work online.

“There are only so many projects you can accomplish during the school year and only so many people you can work with. The Fall connected me to a crew I very much wanted to work with, and I really grew creatively and professionally through the experience,” said Mohring.

“I also love the idea that anyone can watch the series on their computer, anytime. I think it’s great that we now have social media to support this format. Even five years ago, spreading the word about an online series was a lot harder than it is today,” Mohring said.

Tupe echoed Mohring’s enthusiasm for the collaborative experience. “Like any other film project, The Fall is based on the hard work of a group of people with diverse skill sets and personalities,” she said. “There were some arguments about style and performance, but it made us more conscious about making decisions. It took many phone calls and long email conversations, but working together definitely allowed us to create something richer than if it had been a one-person production.”