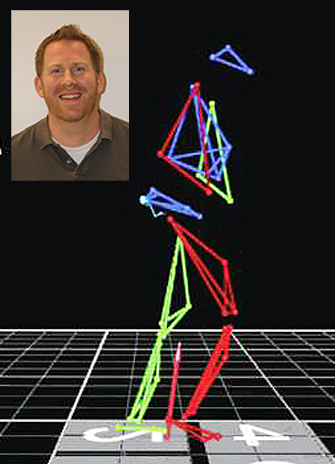 Adopting a narrow gait while walking could help slow the progression of osteoarthritis in some patients and delay the need for surgery, researchers at York University have found.

This is particularly important for young patients diagnosed with osteoarthritis, says York University PhD candidate Brian Street, who conducted the study on gait at the Gait and Posture Laboratory – Biomechanics at York under the supervision of Professor William Gage, associate dean, research & innovation, in York’s Faculty of Health.

balanced distribution of the forces across the knee – known as the external knee adduction moment (EKAM). Normally, this force in the joint pushes the knee out in a bowlegged manner and causes more of the forces generated during walking to be concentrated on the medial or inner portion of the knee.

His study, “The Effects of an Adopted Narrow Gait on the External Adduction Moment at the Knee Joint during Level Walking: Evidence of Asymmetry”, was published online in the journal of Human Movement Science.

The study looked at 15 healthy male participants as they walked three metres with a narrow gait, a toe-out gait – externally rotating their toes by 10 to 30 degrees (sometimes referred to as a “duck walk”) – and their normal gait to see if the magnitude of the EKAM differed between gait types. Participants completed 10 randomized trials of each walking style, where each leg was simultaneously captured with two force plates and seven specialized cameras, creating a full three-dimensional perspective of each participant’s movements.

There are two major peaks for the EKAM that occur during the stance phase – when the foot is in contact with the ground – when walking, says Street. The first peak, which is most important for those with osteoarthritis, happens when the heel

of the foot makes contact with the ground and that leg is loaded with body weight. The second peak occurs when the toes push off from the ground.

Brian Street demonstrates how the cameras helped capture what was happening to the knees during walking, while trying out different gaits

What Street found and was surprised by, was that the narrow gait showed a nearly 50 per cent decrease in the EKAM at the first peak. Knee surgery has been shown to only decrease the EKAM by 30 to 40 per cent, he says. The toe-out gait had no impact on that first peak.

“Interventions that have been successful in reducing the EKAM, such as high tibial osteotomy, are costly and invasive. It begs the question: Can changing your gait reduce the loading on your joint and perhaps delay the need for surgery? If it can reduce the pain, maybe people will be more active, which could have a long-term, positive effect on health,” he says.

“The findings give merit to the utility of modified walking strategies in general, and specifically the narrow walking strategy, in reducing the EKAM, which could lead to the reduction in the rate of disease progression.” He also noted, though, that walking with a narrow gait may be unstable for some people, increasing the risk of falling, and so should be used judiciously. More research is needed to investigate the possibility of increased fall risk.

The decrease in EKAM, however, was only apparent in the non-dominant leg – the leg more responsible for stability while walking – and not the dominant leg that initiates walking and plays a larger role in the propulsion duties, driving the person forward.

The reason the impact seems to only affect the non-dominant leg has to do with shifting the centre of gravity more centrally over the limb most responsible for balance in a way that doesn’t occur with the dominant, forward-driving limb. None of the gait strategies altered the force of the initial impact, but the narrow gait did affect the amount of force that would be concentrated on the medial side of the knee – which is particularly troubling for people with osteoarthritis.

In addition, as the study also looked at limb dominance, the results point to the importance of compiling data from both the dominant and non-dominant legs simultaneously. “It provides new insight into how limb dominance can affect modified walking strategies, which is important to future research design and methodology,” Street says.

Most studies involving modified walking strategies to date have assumed human gait is symmetrical. “This should raise a red flag to other researchers that simultaneous data collection on both limbs is needed, otherwise there could be valuable and important systemic effects of the strategy missing,” he says. “The limbs work in tandem while walking, but are not necessarily symmetrical for this measurement.”

The next stage of research will be to look at the effects of a narrower gait on people with osteoarthritis, says Street.