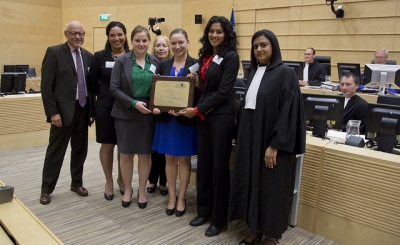 Osgoode Hall Law School students Valerie Fernandes, Ania Kwadrans and Katherine Stewart, and coaches Leo Adler and Rita Maxwell, are the first runner-up team in the International Criminal Legal Network (ICLN) International Criminal Court (ICC) Trial Competition, which took place April 21 to 26 in The Hague, Netherlands. A record number of teams – 37 from 27 countries – participated in the sixth edition of the competition, which was won by the Netherlands-based Leiden University. Bond University placed third.

“All three teams – Bond, Leiden and Osgoode – were terrific,” Adler said in an e-mail message. “The judges said the differences between them were razor-thin, and we could believe it.”

In addition, Stewart was Best Overall Orator of the entire tournament, scoring 98 out of a possible 100 points. Fernandes was also Best Oralist: Second Place in the regional rounds for the ICC Competition in New York leading up to the final rounds in The Hague.

“The finals were phenomenal,” Adler said.  “Osgoode should be thrilled that, once again, we retain our status as the most consistently best school over the six years of the competition. We look forward to edition seven in 2014.”