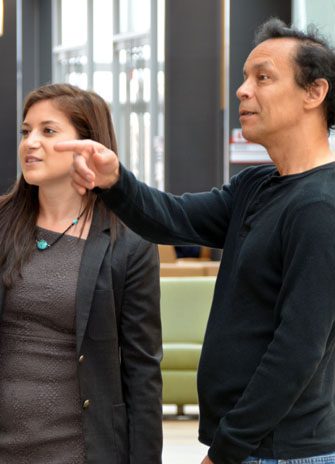 Osgoode Hall Law School has marked another exciting milestone on the road to strengthening its connections with indigenous communities and bringing art into legal education.

The law school, Justice Harry LaForme (LLB ’77, LLD ’08) and his wife, Janice (LLB ’84), hosted a reception May 1 at historic Campbell House in downtown Toronto in honour of celebrated Gitxsan First Nations artist and master carver Ya’Ya Heit. The British Columbia-based artist has been engaged to create a signature art piece for Osgoode.

The students have created a display of faceless dolls to show solidarity and support for NWAC’s research and efforts to create greater awareness of the issue of missing and murdered Aboriginal women in Canada.

Heit and Forget with the Faceless Dolls display

Osgoode Dean Lorne Sossin said the school’s engagement with Heit and the Faceless Dolls Project reflects “the coming together of two major streams of the law school.”

“These two streams are the indigenous communities we want to connect with, support and reflect, and [they are] also bringing art into legal education to disseminate ideas through art and to teach and learn about law and justice.”

He added that Osgoode’s new building “is our canvas and we hope to imagine all sorts of ways, in every aspect of it, to reflect the values we care most about.”

Heit hails from Kispiox, B.C., where his main teacher and mentor in the art of carving was his uncle, the late Chief Walter Harris. Heit’s full name is actually Charles Peter Heit and his Gitxsan name is Axgagoodiit, but he prefers to go by his nickname and signs his carvings as Ya’Ya.

Not only does Heit make magnificent carvings, primarily using red cedar, he also designs stunning jewelry pieces. His work has appeared in many exhibitions. In Toronto, his totem poles are on display at the Spadina Subway Station, the Federal Court House at 180 Queen Street West and at the Maclean-Hunter Building in College Park.

LaForme, who sits on the Ontario Court of Appeal and is the first appellate court judge in Canadian history with a First Nations background, had high praise for Heit’s work. The artist created a carved wood “talking stick” for LaForme that he showed guests at the reception.

Harry LaForme with the talking stick created for him by Heit

“This is my life,” said LaForme, a member of the Mississaugas of New Credit First Nation, pointing to his talking stick.

Earlier in the day, Heit, accompanied by his cousins Janice Scott and Trish Cooper, was given a tour of Osgoode’s building. He also had lunch with a group of faculty, students and staff who offered their ideas on the direction the art project at Osgoode should take. Over the next few months, details of Heit’s approach to the project will be finalized and work will get under way in the fall.

“I feel very lucky over the past 20 years to have done a lot of work with law and also education,” Heit said. “I welcome the opportunity to work with Osgoode.”