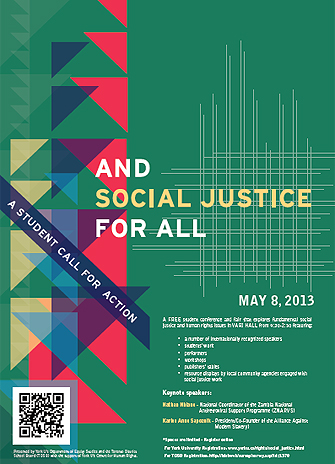 What does social justice look like? On Wednesday, May 8, York University’s Department of Equity Studies and some 500 students from the Toronto District School Board (TDSB) will converge on Vari Hall to find out.

That’s when the “And Social Justice for All: A Student Call for Action” conference and fair will explore social justice and human rights issues. The free conference will take

place in Vari Hall from 9:30am to 2:30pm and will include local community agencies engaged with social justice work.

Students in Grades 6 to 12 from several TDSB schools, along with their teachers, will attend the conference.

The driving force behind “And Social Justice for All” is the 1948 Universal Declaration of Human Rights by the United Nations, which promised much in the way of human rights and social justice for all of the world’s peoples. However, much of that promise remains unfulfilled as evidenced by the rampant inequality, dispossession and exploitation to which large segments of the world’s population continue to be subjected.

Workshops will take place in Vari Hall and Ross Building at 10:30am and again at 12:50pm. Topics will include: making sense of violence in everyday life, difference, a

The workshop on human trafficking with Karlee Sapoznik (MA ’09), a PhD candidate in history at York University and the president and co-founder of the Alliance Against Modern Slavery, and Jeff Gunn (BFA Hons. ’02, BEd ’02), a York PhD candidate in African history, will only be available in the afternoon. Gunn is a full-time writer, musician and educator. He is the touring guitarist with former child soldier Emmanuel Jal and has recorded and/or performed with a variety of artists, including DMC (RUN DMC), Dwayne Britton (LML Music), Bone Crusher (Vainglorious Ent.), Kae Sun, Shad, Serena Ryder and Celeste Siam (DJ).

Conference keynote speakers Nathan Nhlane and Sapoznik will deliver their talks at 10am and 1:45pm, respectively, in Curtis Lecture Hall “L”.

Nhlane is the national coordinator of the Zambia National Antiretroviral Support Program (ZNARVS), an organization established to create support groups for people living with HIV/AIDS. ZNARVS works toward promoting psychosocial support, treatment access and advocacy for human rights and nutritional support for people

living with HIV/AIDS. Nhlane was previously the chairperson of the Tuchimfye support group. Since 2004, 74 support groups have been established with more than 8,000 members in Lusaka and the Western, Eastern and Southern provinces of Zambia.

Sapoznik’s talk, “Human Trafficking and Slavery in Canada, Eh?”, comes from her work with survivors, as well as her research. She publishes works on slavery in all of its forms, human trafficking, human rights, transnational history, genocide and memory, women’s and gender history, the Holocaust and forced marriage. She has represented Canada academically and as part of anti-slavery, anti-trafficking and Holocaust research projects abroad in Sierra Leone, Mali, Italy, England, Spain, Ukraine, Israel and the United States. She will be accompanied by musician Mike Black.

Sapoznik has contributed to various journals and online blogs. Her book The Letters and Other Writings of Gustavus Vassa (alias Olaudah Equiano, the African): Documenting Abolition of the Slave Trade was published this fall by Markus Wiener Publishers, Princeton. She speaks across Canada about contemporary slavery and the Holocaust, and leads anti-slavery initiatives in Canada, Mali and Peru. She recently appeared on CBC’s “The National”.

The conference is a result of a partnership between York’s Department of Equity Studies in the Faculty of Liberal Arts & Professional Studies and the TDSB with support from the Centre for Human Rights at York University.