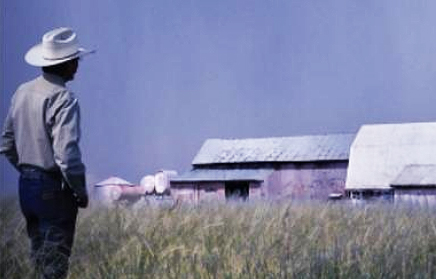 The tranquility of wide open blue skies and endless prairie fields can belie the turmoil of giving up the family farm, and it is this dichotomy, of beauty and struggle, which is depicted in a new documentary film written by a York University professor.

Political science Professor Clark Banack of the Faculty of Liberal Arts & Professional Studies wrote the screen play for The Auctioneer, which will have its world premiere as part of Hot

“The film is really just a window into the life of a pretty unique character in prairie agrarian life: the individual that presides over an event that is very much akin to a funeral, the death of a family farm, regardless of the particular circumstances behind the farm’s demise,” says Banack. He acutely remembers as a teenager his family selling their farm and holding their own auction. Banack has gone on to research and teach topics related to religion and politics, Canadian and provincial politics, Canadian political thought and rural-urban issues.

The Auctioneer gets inside the life of prairie auctioneer, and town undertaker, Dale Menzak,

who helps families part with century-old farms. As an auctioneer, he sells off bits and pieces of agricultural life, a symbol of rural culture facing obsolescence if ever there was one.

“The fact that Dale’s second job is that of an actual undertaker, and that he values more traditional ways of tending to the land in his spare time, like raking hay with his horses, just added that much more depth to the film and allowed us to play with the themes of change and progress and death in subtle ways.”

Directed by Banack’s long-time friend Hans Olson, both grew up in Alberta, the 58-minute documentary is approached with an implicit understanding of the subject matter. Rather than waxing nostalgic, the filmmakers kept their distance allowing the film to unfold naturally.

“While The Auctioneer grew out of our preoccupation with ‘the death of the family farm’, we decided not to make a research-based issue film,” says Banack. “Instead, our hope was that the changing nature of rural communities would create the backdrop for a more personal portrait of the auctioneer – the individual who accompanies the process of letting go.”

Olson’s most recent short film, Champagne, was produced by the CFC, screened at the 2010 Toronto International Film Festival and has been broadcast on CBC and TMN. Previously, he directed two narrative shorts set on the Canadian prairies, Bronwen’s Ark

A screenshot from the documentary The Auctioneer

The Auctioneer will screen with Packing Up the Wagon: The Last Days of Wagon Wheel Lunch.