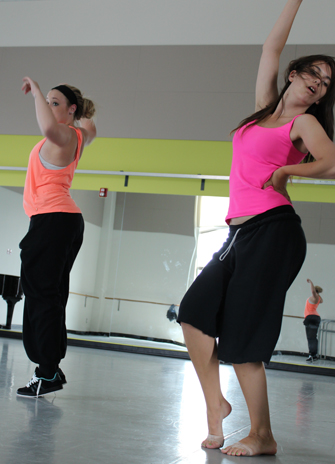 Now gearing up for its second season, FASI is a dynamic community outreach and continuing education initiative of York University’s Faculty of Fine Arts. It offers experiential workshops, boot camps and intensives in dance, design, digital

“That can mean a university-level fine arts education preview for high school students, a subject not offered in regular course selections for our current students, specialized pedagogical training for educators, or professional-level certification to help artists make connections and take their skills to the next level.”

Feedback from participants in FASI’s inaugural 2012 season was overwhelmingly positive.

“It’s astounding that such a valuable cross-disciplinary opportunity isn’t offered elsewhere,” said Felicia Mittica, who took part in a Rusticle Gym workshop last summer. “I’ve been able to expand my training, learning about movement and acting to enhance and support my classical voice education.”

Gillian Balfour was equally enthusiastic about her daughter’s experience in FASI’s hip hop boot camp. “As a high school student with a passion for dance, spending time on a university campus immersed in a post-secondary dance environment was ideal for her,” she said. “FASI was intense and educational. We will be back.”

FASI 2013 launches in May with a reprise of one of last season’s biggest hits: a series of technical workshops in lighting design for live performance devised specifically for high school students. Last year, three dozen York Region students snapped up the chance to come to campus to work with university instructors and top-of-the-line equipment in the Fine Arts complex.

“This year, we’ve expanded the number of spots to 50 to keep up with the demand,” said FASI coordinator, York alumnus Albert Tam (BFA ’11).

All FASI workshops are taught by professional artists and experienced educators, many of whom are faculty members or graduates of the Faculty of Fine Arts. Highlights include:

New this year, FASI participants have the option to arrange on-campus accommodation.

“It’s an ideal solution if you don’t live near York or commuting isn’t feasible,” said Tam. “Staying on campus not only lets you concentrate fully on your intensive, it also opens the door to exploring Toronto’s great arts and culture scene. And even if distance isn’t an issue, students may want to extend their FASI learning experience with a taste of university residence life.”