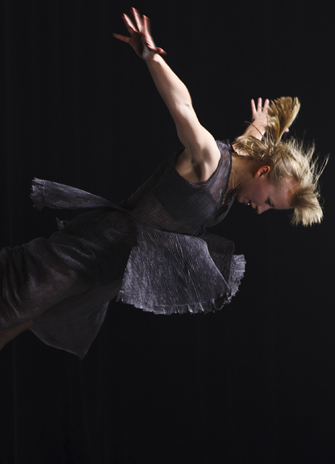 The York Dance Ensemble (YDE), the resident company of York University’s Department of Dance, marks its 25th anniversary with Rite Redux, a celebration of dance, music and spectacle running April 18 to 20 in the Sandra Faire and Ivan Fecan Theatre on York’s Keele campus.

The show features three world premieres choreographed by York dance faculty, including the showcase title production, an audacious 21st century re-imagining of the iconic ballet Le Sacre du printemps (The Rite of Spring), which celebrates its centenary this year.

Choreographed by Vaslav Nijinsky, to music composed by Igor Stravinsky, for the 1913 Paris season of Sergei Diaghilev’s legendary Ballets Russes, The Rite of Spring was a game-changing moment in the history of music and dance. The dissonant tones and driving yet unpredictable rhythms of Stravinsky’s revolutionary score, and the sharp angles, contorted shapes and forceful stomping in Nijinsky’s ground-breaking choreography, burst the artistic boundaries of the day.

In the 100 years since its premiere, The Rite of Spring has been revisited and re-invented by scores of dance artists inspired by this cultural milestone. The YDE heralds its own quarter-century season with an exciting new contribution to the canon with Rite Redux.

A co-production of the Departments of Dance and Music in the Faculty of Fine Arts, the show also features music by Stravinsky and his contemporaries, performed by York music faculty members and guest artists. Dance Professor Holly Small, the YDE’s artistic director, serves as artistic director for the production.

The program opens with In Just Spring…. a collaborative work created and performed by the 17 dancers and six musicians of the YDE under Small’s direction. Drawing inspiration from the early 20th century poem “in Just-” by e.e.cummings, the work hints playfully at the “spring” theme underpinning the signature work coming later on the playbill.

York music alumna, flautist Kim Chow-Morris (MA ’98, PhD ’04) performs Claude Debussy’s haunting Syrinx, composed in 1913, the same year as Le Sacre du printemps. This brief, haunting piece for solo flute is Debussy’s impressionist evocation of the myth of Syrinx, the nymph who escaped the amorous advances of the god Pan by disguising herself as a hollow reed.

Acclaimed pianist and York music Professor Christina Petrowska Quilico brings her formidable artistry to a selection of short works written in Paris in 1913 by Debussy and his friend and fellow composer, Erik Satie. Petrowska Quilico has chosen Satie’s Embryons desséchés and Croquis et agaceries d’un gros bonhomme en bois in part because of the humorous commentary in the score about the manner in which they should be played. In contrast to Satie’s light-hearted approach, Debussy’s Feux d’artifice is orchestral in scope, demanding a fiery, virtuosic piano technique.

The climax of the evening is the titular world premiere, Rite Redux. Co-choreographed by Small and her colleagues, York dance Professors Carol Anderson and Darcey Callison, this daring re-imagining of The Rite of Spring pays homage to certain shapes, steps and objects from Nijinsky’s original choreography, but refracted through a thoroughly contemporary and very Canadian lens.

Rite Redux is set in the wilds of northern Ontario, and the talented young artists in the YDE perform within fantastical landscape projections conjuring a hyper-reality based on the rugged visual elements found in the imagery of Tom Thomson and the Group of Seven.

The dancers are accompanied by York music Professor Michael Coghlan and guest artist John Kruspe playing Stravinsky’s original one-piano, four-hand score for The Rite of Spring. Lighting and projection design are by Professor William Mackwood, with costumes by Julia Tribe.

Rite Redux is a highlight of Sacre Celebration: Revisiting, Reflecting, Revisioning, a special topics conference presented by the Society of Dance History Scholars in partnership with York University’s Faculty of Fine Arts, taking place at York April 18-20. The conference features papers, panels, workshops and performances dedicated to Le Sacre du printemps and its influence on dance, music and theatre over the past century. For details on the conference program and registration, visit the Sacre Celebration website.