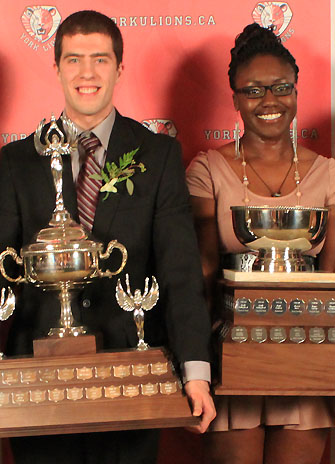 York University Lions track and field athletes David McKay and Cynthia Appiah were named the male and female athletes of the year during the 45th annual Interuniversity Sport Banquet on April 4.

McKay and Appiah were named York’s top athletes from among a group of more than 400 student-athletes at the banquet to wrap up a successful 2012-2013 campaign. McKay is the second track and field athlete to earn the male athlete of the year award, while Appiah is the first from her sport since Heather Hamilton was given the honour in 2010.

Several other student-athletes were also honoured at the banquet.

Karim Khalil of the volleyball team received the Charles Saundercook Memorial Trophy, which is presented to a male athlete who best exemplifies the qualities of perseverance, sportsmanship, enthusiasm for life and the consideration of others. Soccer player Felicia Turone was named the recipient of the Bryce M. Taylor Award, given to a graduating female athlete who has made outstanding contributions to interuniversity sport at York University.

The coach of the year award was presented to cross country and track and field head coach Colin Inglis, while soccer players Mark-Anthony Kaye and Nour Ghoneim were named the male and female rookie of the year award winners, respectively.

The men’s volleyball team was named the most improved team for the season.

The Spirit Cup, which was donated by York University President Emerita Lorna Marsden and is presented to the individual or group within York University that best exemplifies the spirit of York University and their involvement in sport, was won by Denis Malinowski and Andrew Weppler.

The Roar Cup, which is presented annually to the Lions varsity team that accumulates the most “Lions for Lions” points in community outreach, attendance at events and athletic and academic achievement, was won by the women’s soccer team.

Rounding out the awards was the Sport Council Award, which was given to Kara Smith and Felicia Turone.

McKay, a second-year pole vaulter, was the best athlete in his event this season, winning both the Ontario University Athletics (OUA) and Canadian Interuniversity Sport (CIS) gold medals in just his second year as a varsity athlete. During the regular season he won four medals overall, including the gold at the McGill Team Challenge, and was ranked number one in CIS. He won the OUA championship for the second straight year to earn first-team all-star honours, and then saved his best for last with his first CIS title to earn a first-team all-Canadian selection. McKay’s 10 points at the CIS championships helped the Lions win the team bronze medal.

Also nominated for the award were Adrian Pena (soccer) and Ray Szeto (volleyball).

Appiah, a fifth-year thrower, won two OUA medals and one CIS medal in her final year with the Lions. After winning bronze medals in the weight throw and shot put at the OUA championships, she finished fourth in the weight throw at the national meet and then capped her season with a silver medal in the shot put. Appiah helped the Lions finish 12th at the CIS championships, contributing all 13 points in the team standings, and was named a CIS all-Canadian after the meet. During the regular season she established a new school record in the weight throw, was named the female athlete of the meet at the Windsor Team Challenge, earned OUA and CIS athlete of the week awards in December and won a total of 16 medals in the two throwing events.

Khalil, a fifth-year outside hitter, has been one of the most dedicated student-athletes at York and has excelled both on and off the court in his time with the Lions. On the court, he has been the team captain for the past three seasons and has overseen the Lions rise from a non-playoff team to an OUA semifinalist. In the classroom, he is a three-time CIS academic all-Canadian and in the community, he served this year as the president of the York Sport Council and as an academic mentor with the P.A.W.S. program. In 2012, he received the OUA’s Dale Iwanoczko Sportsman Award for athletics, academics and community service, and the Stuart G. Robbins Award for the student-athlete with the highest GPA among Sport Excellence Award winners. Khalil has been asked on numerous occasions to speak on behalf of student-athletes at events on campus, and he is the true embodiment of the characteristics of the Charles Saundercook Award.

Turone, a fifth-year defender, has been a true leader for the Lions women’s soccer team in her five years with the program. A member of the OUA title-winning team in 2009, she became a regular starter on defence in her third year and has helped the Lions allow a division-low 18 goals in 30 regular-season games over the past two years and earning back-to-back OUA all-star selections. Turone has been the team captain in each of the last two years and this season, as a sport council representative, was instrumental in helping the women’s soccer team win the Roar Cup after two years outside the top three in the final standings. She earned CIS academic all-Canadian honours for the first time in 2012 and this year she was the recipient of the Stuart G. Robbins Award after recording the highest GPA among all Sport Excellence Award winners. Turone is also a dedicated volunteer in the community as a youth soccer coach and a tutor, and through the education program at York she has worked with autistic children at a local elementary school. For all of her efforts, Turone was chosen as York’s representative for the OUA Women of Influence luncheon later this spring.

Inglis, the head coach for the men’s and women’s cross country and track and field teams, took a very young track and field squad to the podium at the CIS championships as the men’s team won the bronze medal despite featuring a roster that included only one individual medallist from the previous year. Of the 25 athletes who qualified for the CIS championships, 11 were at the national meet for the first time. Overall, his student-athletes had 35 CIS qualifying performances, 217 OUA qualifying performances and 171 personal bests. Four athletes were named CIS all-Canadians and three earned OUA all-star honours. Both the men’s and women’s track and field teams were ranked among the CIS Top 10 in the regular season.

Joe Costello, head coach of the women’s rugby team, was also nominated for the award.

Kaye, a first-year midfielder from Toronto, quickly became one of the best scorers in the conference in his first season with the Lions. He earned a place in the starting lineup out of training camp and appeared in 15 regular-season games. He finished seventh overall in OUA scoring, and first among all rookies, with seven goals to earn the OUA West rookie of the year award. Kaye’s play helped the Lions to an undefeated regular season and the OUA team bronze medal.

Also nominated for the award were Anojan Sivalingam (track and field) and Daniel Tulloch (basketball).

Ghoneim, a first-year striker from Toronto, proved in her first year with the Lions that she is one of the most dangerous scorers in the country. She finished third overall in OUA scoring with 13 goals in just 10 games, at least three less games played than every other player in the top 20, and accounted for more than 40 per cent of the team’s goals in the regular season. She scored two natural hat-tricks in back-to-back games to earn OUA and CIS athlete of the week honours in October, and ended the season by being named the OUA and CIS rookie of the year, as well as an OUA first-team all-star.

Also nominated for the award were Tameran Defreitas (track and field) and Dorrian Khouri (rugby).

The Lions men’s volleyball team finished with two more wins and two places higher in the standings than last year. The squad’s fifth-place finish in the OUA standings qualified them for the quarter-finals, where they upset the Queen’s Gaels in five sets to advance to the OUA Final Four Championships for the first time since 2007. Before the playoffs, the Lions upset the No. 2 nationally ranked McMaster Marauders, giving them their only loss of the year, and defeated the eventual CIS semifinalist Western Mustangs three times in five matches. The Lions won Ryerson’s pre-season tournament and finished second at the annual Excalibur Volleyball Classic, and the squad produced its first CIS first-team all-Canadian since 1989.

The women’s rugby team was also nominated for the award.