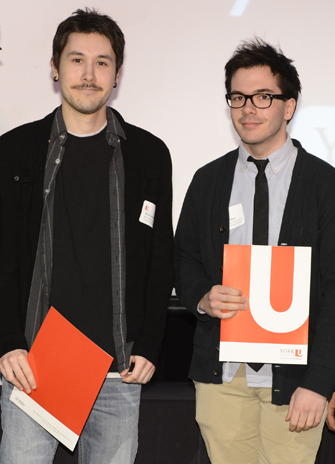 York University alumnus and celebrated author Nino Ricci (BA ’81) told students Wednesday at the President’s Creative Writing Awards reception that it’s probably the best time in the history of the planet to be a writer.

Despite the complaint of writers for decades that the literary landscape was changing, that it was difficult to get published and overall a tough slog to be a writer, writing has persisted, he said. “…literature remains perhaps the one branch of knowledge…that is able to synthesize the complexity of human experience in a way that makes it meaningful for us and in a way that makes us understand that complexity. I don’t think it’s going to go away anytime soon.”

That’s good news for the students enrolled in York’s Creative Writing Program in the Department of English, Faculty of Liberal Arts & Professional Studies, many of whom were on hand to accept awards for their writing.

“We don’t celebrate the accomplishments of our best performing students enough and that’s why I’m excited to see all of you here today,” said Martin Singer, dean of the Faculty of Liberal Arts & Professional Studies.

Around a dozen students were honoured at the reception, for their writing in everything from poetry and stage play to screenplay and short fiction, through the Office of the President, the Faculty of Liberal Arts & Professional Studies and private donors.

“Every year it amazes me what incredible students we have. I’m thrilled to play a role in the development of the next generation of Canadian writers, many of whom are in this room. Whether you realize it fully or not, your faculty do and are proud of you,” said David Goldstein, coordinator of the Creative Writing Program.

The following is the list of this year’s award-winning students:

The following awards were presented by York’s Creative Writing Program in the Department of English, Faculty of Liberal Arts & Professional Studies:

The Babs Burggraf Award in creative writing offers financial assistance to a fourth-year student majoring in creative writing with proven talent and achievement in the area of short story writing. Faculty members in the program nominate students who have submitted short stories as part of their academic work for the session.

The Stanley Fefferman Prize is awarded for the best all-round achievement in the second-year Introduction to Creative Writing course and for the best original portfolio of coursework.