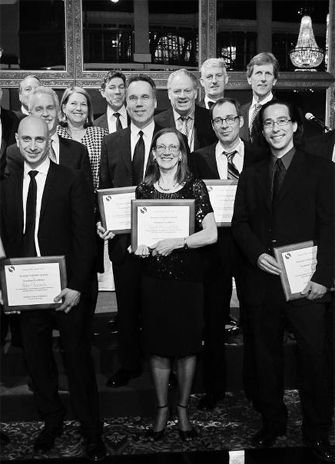 Business history chair and policy Professor Matthias Kipping has been put through a rigorous performance review by his own MBA students, but he doesn’t seem to mind. That’s because he’s this year’s winner of the $15,000 top prize in the student-run Seymour Schulich Teaching Excellence Awards program.

Ashwin Joshi, an associate professor of marketing and director of the MBA program at the Schulich School of Business, takes home

the $10,000 second prize for teaching excellence. The awards were presented by Inder Dhillon and Bori Csillag, president and vice-president of the Graduate Business Council, respectively, on behalf of the school’s 1,138 master’s students.

Established 16 years ago with an endowment from the school’s namesake, Seymour Schulich, the Schulich Teaching Excellence Awards program is run by master’s students, who nominate and vote online for their favourite professors. The awards recognize enthusiasm for a given subject matter, exceptional teaching strategies and facilitating positive student learning experiences. The Schulich Teaching Excellence Awards are among the largest such awards in North America.

“It is great to see that students appreciate the long-term view on business in my course, something the school has been promoting for many years,” says Kipping, who is also a professor of policy. “But the real story is that so many Schulich professors – 26 of us –

were nominated for the Teaching Excellence Award, which shows that students recognize the dedication of their professors and the quality of the education they are receiving.”

Dhillon agrees the number of nominations this year is significant, since each nomination requires at least 10 endorsing signatures, along with five support letters from students of the professor. “It means that at least 15 students from a class taught by each of those 26 nominated professors really liked the way they were taught by the professor,” he says.

“Kipping has been described as possessing a remarkable ability to transform any class material to something all students can easily learn from and apply in the real business world. The professor engages the class via question-and-response format, enabling students to be involved in every step of the learning process. Students appreciate this professor’s detailed and in-depth feedback and highlight his knowledge and sense of humour,” says Dhillon.

“Joshi has been described as energetic and enthusiastic, with professional experience and an ability to connect with students on a personal level. With the ability to foster students’ love of learning, this professor keeps the classroom engaged by applying key concepts to recent issues and trends, facilitating class discussion and challenging students to think beyond their preconceived opinions and ideas,” says Dhillon. “One student commented that many students come into this professor’s class with little or no knowledge and interest in the course, and leave genuinely inspired with a new appreciation for marketing.”

All 26 nominated faculty members, who are listed on Graduate Business Council website, were asked to complete a lengthy questionnaire, which asks them to describe what they were like as university students and their most memorable teaching experience, among other topics.

In his responses, Kipping says: “What I always enjoy is the mock trial of Ivar Kreuger we do in class, where students use role play to try and convict (or defend) him of fraud and forgery. They always come up with great ideas of how to do that – and act it out brilliantly. This year, for instance, somebody did a Jack Nicholson impression from [the movie] A Few Good Men: ‘You can’t handle the truth. . .’, adapted to the world of international business.”

The legal and illegal schemes of Ivar Kreuger, a Swedish industrialist who was hailed as a financial innovator before his empire collapsed in 1932, prompting his suicide, have been described by some historians as the greatest fraud ever.

“Kreuger is a very interesting case and character – undeservedly forgotten today,” Kipping says. “On the one hand, he is a combination of Enron and [self-admitted contemporary Ponzi scheme operator] Bernie Madoff – and actually bigger and more consequential – because  his fall led to the creation of the Securities and Exchange Commission. On the other hand, [Kreuger] is also a brilliant business mind and the saviour of Europe from bankruptcy in the interwar period.”

Kipping continues: “What matters is that my cases are historical. So rather than falling for short-term hypes – remember Enron? – we know exactly what people at the time did right and where they made mistakes, which, I believe, provides a great learning experience and deep, lasting insights.”

When asked what advice he’d most like to give his students, Kipping replies, “Think.”