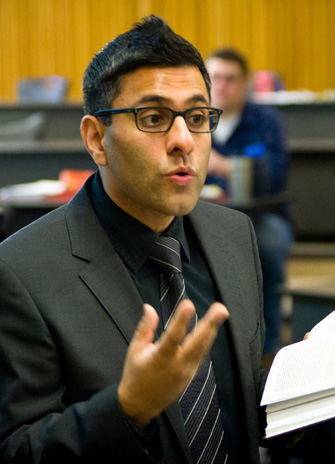 “We are very proud that Professor Dhir will be heading to Yale, where his teaching and research contributions will no doubt add to a greater understanding of our two countries’ legal systems,” said Sossin. “ I know you will join me in congratulating him and wishing him all the best.”

Dhir, who was recognized by Lexpert Magazine in 2011 as one of Canada’s leading lawyers under 40, will be hosted by Yale Law School and will be the first Canadian Bicentennial Visiting Scholar in the history of that faculty.  His teaching at Yale will include courses on corporations and human rights, as well as corporate governance. He will also continue his work on a book project, under contract with Cambridge University Press, which explores the topic of diversity and corporate governance.

Another York University scholar – Karolyn Smardz Frost, senior research fellow for African Canadian history at York’s Harriet Tubman Institute for Research on the Global Migrations of African Peoples – is currently at Yale this academic year as the Canadian Bicentennial Visiting Scholar. She is cross-appointed to Yale’s history department.

The appointment, offered annually through Yale’s Whitney and Betty MacMillan Center for International and Area Studies, supports Canadian scholars who study Canada in a comparative or international context.

Started in 1976 as a gift of the Canadian government to Yale, this endowed, visiting professorship brings a distinguished visitor from a Canadian university to Yale for a semester or an academic year to sustain curricular offerings and intellectual attention on Canada at Yale.

Yale has maintained close ties with Canada for nearly three centuries. It first accepted Canadian students in the early 18th century and now graduates the second highest number of Canadians among American universities.