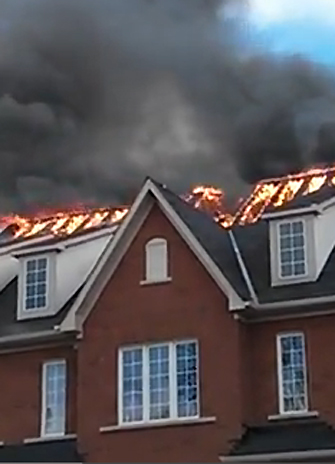 For 38 people, including 16 students from York University and five Seneca College students, April 1 wasn’t a day for jokes and pranks. The group was left homeless after a fire and smoke damaged three townhouse units in “The Village”, a development situated south of the University’s Keele campus.

The blaze damaged several homes in The Village community

High winds and bitter cold hampered firefighters and the blaze spread between Units 237 and 239 Assiniboine Road, while the Unit 241, was damaged by smoke. Units 237 and 239 were left uninhabitable, and Unit 241 was left without power and heat.

“It was very fortunate that no one was injured,” said Janet Morrison, York University’s vice-provost students. What followed, said Morrison, was a community effort to rally around those affected by the fire to give them support, warmth and food. “We did not make a distinction between York students and residents,” she said. “Everyone needed help and we provided it.”

Morrison, along with University administrators and a group of volunteers worked quickly to put together a compassionate and immediate effort. Within minutes of hearing of the blaze, senior administrators met in the York Research Tower (YRT) and the Division of Students began tweeting messaging to the community, providing updates and reaching out to those affected by the fire. Morrison sent two members of her team over to Assiniboine Road to connect with the students and Village residents displaced by the fire. She then contacted Christine Blake-Durie, dean of students at Seneca College, who joined the support team. They designated the Bennett Centre for Student Services (BCSS) building as the gathering site for students and Village residents left without shelter.

Groups of staff members from the Division of Students, Campus Services & Business Operations (CSBO), and Communications & Public Affairs, and student volunteers from the York Federation of Students got to work pulling together resources for the students displaced by the fire. As reports from the site and media arrived, they determined the fire was very serious and long-term assistance would be needed.

The YRT team quickly approved temporary shelter in the Executive Learning Centre for all of the students and residents affected by the fire. A total of 37 people were given rooms. CSBO provided pizza and drinks for the

The biggest challenge, said Morrison, was that the fire had destroyed all of the clothing, possessions, important documents, computers and school books owned by the students and residents in the townhouses. They were left with the clothes they were wearing and whatever they managed to grab before evacuating their homes. Compounding the problem was the fact that it was the end of term and for some students, important assignments, notebooks and resources needed for final exams were lost in the fire. Some did not have insurance to cover their losses.

The next day, staff from the University’s Office of Emergency Preparedness worked on connecting Village residents with representatives from the City of Toronto, the Salvation Army and the Red Cross. All of the York students affected by the fire met individually with Morrison’s team to assess what supports they would need, while Seneca students received assistance from their college.

After the meetings, it was determined that eight York students who were living in Units 237 and 239 needed additional assistance. Of those, seven students required extended housing support, which was arranged through Residence Life at Founders College residence at no cost to the students. University Information Technology sourced loaner computers for the students and the York University Bookstore and University Libraries coordinated their efforts to gather textbooks. Sport and Recreation stepped forward to help the students with laundry. All of the students were provided with $100 cash, a YU-card loaded with $100 for food, a $40 Salvation Army Thrift Shop gift card and a Red Cross toiletry kit.

“The York Federation of Students has been a tremendous partner,” said Morrison. “They provided access to their food bank for the students and are collecting clothing donations. The YFS executive met with the students and subsequently purchased backpacks, necessities and warm clothing. They are also working to provide each student with a $250 Visa card and The Underground restaurant has given each student a $100 gift certificate.”

The Registrar’s Office contacted every dean, associate dean and advising coordinator for each of the students and notes were sent to course directors. “We’ve gathered specific information from each student about their exams, assignments and essays,” Morrison said, noting that accommodation needs were being arranged.

The students who lived in 241 Assiniboine Road have returned to their home, while those living in the more severely damaged units will remain in Founders Residence.

“We are taking it one day at a time,” she said. “We have made sure that the students have what they need to finish their year successfully and we will go forward from there. From the start, the University’s commitment has been unwavering, from the immediate emergency response to extended support, we have been living the values of our community – engaged, caring and compassionate. I often say that York University is filled with people who, on a daily basis, engage in spontaneous acts of kindness. This was so evident in the way the community has rallied around the students and supported them.”

For more information or to make a donation of cash, food or clothing, contact Safiyah Husein, YFS vice-president equity at vpequity@yfs.ca, or call 416-736-2100 ext. 2025. All donations will be gratefully received.