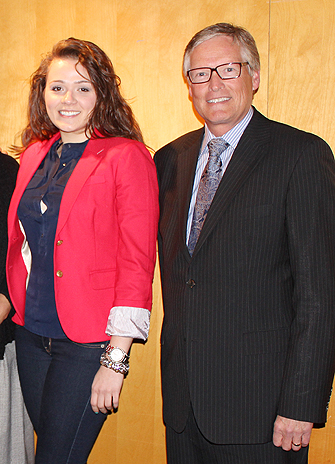 The award was created to recognize current undergraduate and graduate students whose leadership has contributed to the growth, development and vitality of York University.

The recipients were assessed on their exhibited leadership skills, dedication, integrity, enthusiasm and the pursuit of excellence through their endeavours.

The recipients were undergraduate students Roshan Udit, in criminology and human rights & equity studies in the Faculty of Liberal Arts & Professional Studies; Prakash Amarasooriya, in kinesiology, health science and psychology in the Faculty of Health; Jaspreet Dulku, in health management

“York University is where students are trained to become citizens of the world,” President & Vice-Chancellor Mamdouh Shoukri told the gathering. “Today, I’m here to recognize the inaugural winners of the award for their tremendous leadership. Each of the recipients embody what York is all about.”

Robert Tiffin, the award’s namesake who served a

s York University’s vice-president, students, for nine years before retiring in 2012, handed out the awards to each of the winners.

Through his strong leadership, dedication, integrity and fairness, Tiffin transformed his operation into one of the most professional student service organizations in the country, serving one of Canada’s largest student populations. “He was absolutely committed to students,” said Shoukri.

As Janet Morrison, vice-provost, students, who hosted the reception, said, “This has just afforded an unprecedented opportunity for me to read rich, fulsome files about amazing students. The strength of the pool was tremendous. You really are the crème de la crème on campus.”

dean of the Lassonde School of Engineering, as well as members of the selection committee.

The recipients were presented with certificates at the reception and will have the award noted on their transcripts. In addition, their names will be added to the awards display wall in the Vari Hall Rotunda.