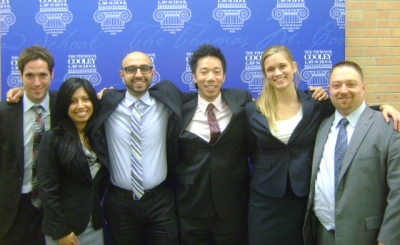 Four other schools (UCLA Hastings, Michigan State University, University of Windsor and Ohio State) participated in the tournament and all but Ohio State played a role in the finals.

“I think all of us who attended from Osgoode would agree that it took the combined efforts of the six of them to attain the victory that we achieved,” coach Bob Thompson wrote in an e-mail message.  “As I have been saying; in my several years of experience with this tournament, I have never seen such close cohesion among the group and such effective and efficient preparation. Their planning was impeccable. Their focus during the tournament was sharp. But their efforts even go beyond that.  Thanks to them, they have prepared templates and flowcharts that will assist the Osgoode teams of the future.”

Thompson, who is an Osgoode PhD candidate, also extended gratitude to the dedicated fellow coaches who contributed so much to the development of the team — alumni Daniel Del Gobbo, Darren Hall, Elias Lyberogiannis and Don McClean — as well as Professor Emeritus Fred Zemans.

“I know how much we value the conflict resolution program that Osgoode offers to our students and it is the quality of this program combined with the incredible skills of our students that made this possible,” Thompson wrote.  “Next on our agenda should be to find out how this victory can be memorialized with a banner hanging at Osgoode Hall Law School.”