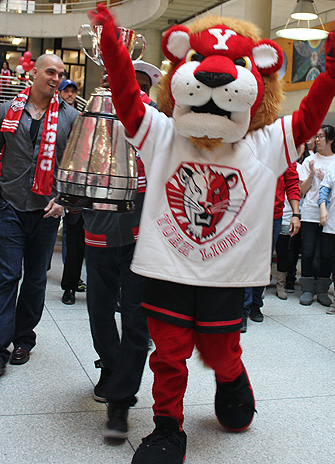 York University students, faculty and staff got quite a surprise Tuesday during the University’s birthday celebrations and the Red and White Spirit Day events.

Three members from the Toronto Argonauts Grey Cup championship team paid a special visit to the Red and White Day rally in the Student Centre. They arrived with the Grey Cup following presentation of York’s varsity and intramural athletes. Former York University Lions football player Ricky Foley, a defensive end with the Toronto Argonauts, who was named the Grey Cup’s most outstanding Canadian following his team’s dominant 35 to 22 victory over the Calgary Stampeders in the 100th Grey Cup last November, led the procession with star receiver Andre Durie carrying the gleaming Grey Cup into the Student Centre. Foley and Durie were joined by running back Jeff Johnson. Durie scored Toronto’s final touchdown of the 100th Grey Cup Championship game. For Johnson, a 13 year veteran of the Canadian Football League that includes 11 years with the Argos, last year’s Grey Cup championship marked the second of his career – he also won the Grey Cup with Toronto in 2004. All three star athletes attended York University and played football on the Lions team.

Amid cheers of “ARRRGOOO and York U, OO-OO YU, YU” the trio brought the cup through the crowds of students gathered for the spirit rally and celebration of the University’s 54th birthday. York University’s President and Vice-Chancellor Mamdouh Shoukri greeted the pro-football players. “You are an inspiration for our students,” he said. “Your commitment to your sport and to York University’s football team is incredible.”

Johnson speaking for the players encouraged students to excel at their studies and get involved in sports. The trio then took the Grey Cup to Vari Hall where they shook hands with students and graciously posed for photographs. Their visit capped an energetic rally, which featured dancing, the York Lions mascots, the University’s cheer leading squad leading hundreds of students in cheers such as “Deep in the Heart of the York U Jungle” and “Y-O-R-K”, and a York gear competition to see who was wearing the most red and white and had the best spirit. A drum performance and synchronized yo-yo demonstration by York students added to the energy of the event.

Joy Brown, a York is U ambassador and student volunteer, and York Federation of Students (YFS) Vice-President of Campus Events Jessica Thyriar, were the spirit rally’s co-hosts. More than 3o York is U student volunteers were involved in planning the celebration, which involved serving 5000 birthday cupcakes to faculty, staff and students at the Keele and Glendon campuses. The student volunteers helped with button making and screen printing “I <3 York U bags” activities and served cotton candy and popcorn to students in Vari Hall.

Red and White Day began bright and early with an Alumni breakfast for grads working on campus. The YFS hosted a breakfast for students in Vari Hall. Red and White Day included a very popular Food Truck event with street food by some of Toronto’s top road worthy gourmets, including Smokie’s Poutinerie, Toasty Zappi, Pretty Sweet and Food Dudes.

There were plenty of  “spirited” food deals with discounts across the University. The York University Bookstore (Keele and Glendon locations) took 25 per cent off all red and white giftware and clothing.

There was also a Red & White Day photo competition. The winner will be announced next week in YFile. Faculty, staff and students were asked to submit photos showing their York U spirit for a chance to win some great prizes.

To view a Storify of the day’s tweets and Instagram photos, visit http://storify.com/YUPres4aDay/red-and-white-day-march-26-2014.

Here is a list of the York athletes who were honoured during Red & White Spirit Day: