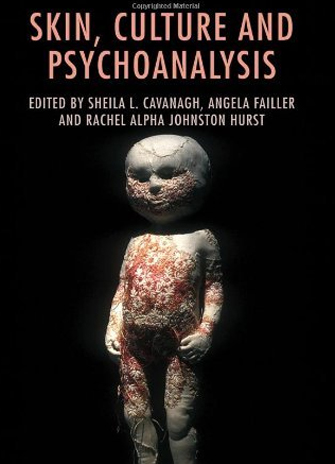 Skin as a canvas, its colour and politics, are explored against a backdrop of culture and psychoanalysis in a new book co-edited by York sociology Professor Sheila Cavanagh and two York alumni.

Skin, Culture and Psychoanalysis (Palgrave Macmillan) takes a look at the many manifestations of skin and what it means. It queries the complex interface between inside and outside, psychic interiority and exterior cultural inscriptions, as well as how skin responds to new and old pressures and articulations.

“Most scholarly work treats the skin as a natural, transcendental and ahistorical entity. We wanted to explore the cultural and psychical meanings of skin as a social and organic interface,” says Cavanagh, who does gender and sexuality studies with a focus on feminist, queer, cultural and psychoanalytic theories.

“This book locates skin at the center of inquiry, rather than a jumping-off point from which to explore deeper issues, which tends to happen when skin is treated synecdochically as a stand in for the body itself.”

It is also a great example of how faculty and recent graduates are doing cutting-edge research together,

Failler is now a professor at the University of Winnipeg, whose research lies in the phenomena at the intersection of culture, embodiment and psychical life. She has also published writings on anorexia and self-harm. Hurst is a professor at St. Francis Xavier University and the author of a forthcoming book, titled Surface Imaginations: Cosmetic Surgery, Photography and Skin.

Our “book explores a variety of topics including the symbolic dominance of white skin, racialization, tattooing, cosmetic surgery, fabric skins, skin eruptions, second skins, the skin in self-harm and skin as a site of psychic repair,” says Cavanagh. “It makes an original contribution to skin studies by deploying cultural studies and psychoanalysis concurrently.”

It is an interdisciplinary collection featuring authors from Australia, Canada, Malaysia and the United States. They explore skin through a clinical and cultural lens using literary fiction, television, film, video art, photography, fashion design and poetry. In doing so, they highlight skin as a socially and culturally mediated exterior simultaneously negotiated at the interior or psychical level.

Some of the pieces, include “From the Skin Ego to the Psychic Envelope: An Introduction to the Work of Didier Anzieu” by Marc Lafance; “Comedic Skin Eruptions: A Psychoanalytic Reading of Austin Powers”; “White Trash: Abject Skin in Film Reviews of Monster” by Cavanagh; “The Skin-Textile in Cosmetic Surgery” by Hurst; Narrative; and “Skin Repair: Bearing Witness Mediatized Representation of Self-Harm” by Failler.

“I hope people will more fully appreciate the multiple significations of skin as it touches upon our diverse subjective positions in culture,” says Cavanagh, who is also the author of Queering Bathrooms: Gender, Sexuality, and the Hygienic Imagination (University of Toronto Press, 2010) and Sexing the Teacher: School Sex Scandals and Queer Pedagogies (University of British Columbia Press, 2007).

For more information or to purchase a copy, visit the Macmillan website.