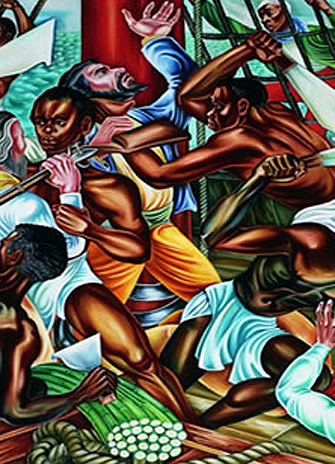 The lecture, “Who Ain’t a Slave: Slavery, Sealing & ‘Free’ Trade in Spanish America, or, The Real Story behind Herman Melville’s Benito

Melville’s novella Benito Cereno, published in 1855, between Moby-Dick and the U.S. Civil War, takes place on a Spanish slave ship shortly after its arrival in the bay of a remote Pacific island off the coast of southern Chile. It is told almost entirely from the point of view of Amasa Delano, the captain of a New England sealer already harboured in that bay, who spotted the ship and went on board.

Melville meant the story to capture a dilemma specific to the United States as it headed toward a war over slavery. This presentation will consider the true events that inspired Melville to explore the meaning of

encounters between empires for slavery in all of the Americas during the Age of Revolution.

Grandin is the author of Fordlandia: The Rise and Fall of Henry Ford’s Forgotten Jungle City, which was a finalist for the Pulitzer Prize in History, as well as for the National Book Award and the National Book Critics

This lecture was organized by York’s Centre for Research on Latin America & the Caribbean and co-sponsored by the African Studies Program, the departments of English and history, the graduate programs in English and history, the Harriet Tubman Institute for Research on the Global Migrations of African Peoples, the International Development Studies Program, Latin American and Caribbean Studies Program and the York Centre for International & Security Studies.